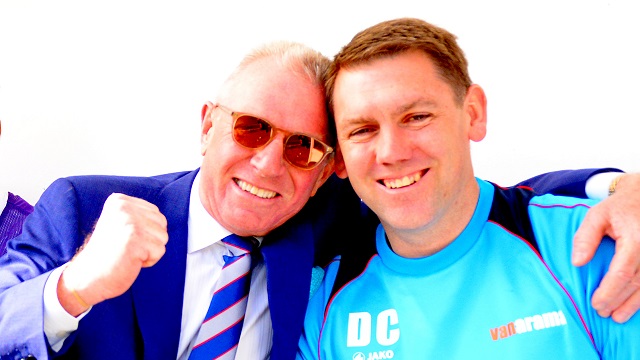 Chally – “We deserve this”

AFC Fylde manager Dave Challinor struggled to hold back the emotion after his side were crowned National League North champions.

A comprehensive 3-0 victory at Boston United yesterday sealed the title for Fylde and Challinor believes years of hard work has paid off.

Challinor said: “It’s difficult to sum up my thoughts at the moment. It’s all very, very emotional. To get over the line and to win in the manner that we did, to be crowned league champions with a game to spare is fantastic.

“It will take some time for it to sink in what we have achieved. I’m really looking forward to next weekend and being able to celebrate at home and get that trophy in front of our fans.

“It’s been a culmination of three years hard work. Really hard work. We came into this division as the unknown quantity three seasons ago and finished second. That raised expectations.

“We lost into the playoffs and again last year with people knowing us, it became a bit more difficult. This year we’ve taken the plunge and gone full-time and got our just desserts. We deserve to get promoted.

“I’m a big believer that the league table doesn’t lie. To put ourselves in the next division and give ourselves new challenges and new targets against new teams that we’ve never played against before is something that I’m really, really excited about. It’s something that everyone can look forward to.”