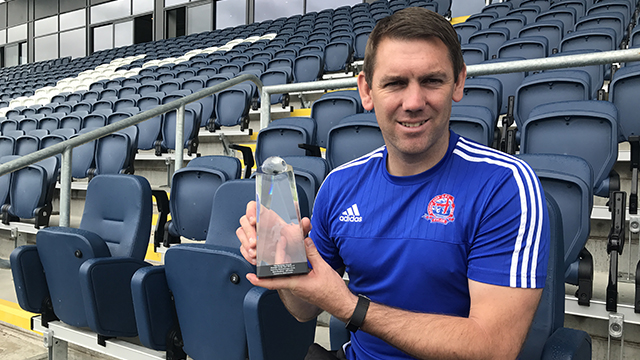 The awards continued to flow for the Coasters after a phenomenal season as boss Dave Challinor was named as the National League North Manager of the Year.

Challinor scooped the top prize at the National League’s annual Awards Evening after guiding Fylde to promotion as Champions.

Clubs from across the National League came together at the ceremony, held at Celtic Manor in Wales, as Challinor, joined by chairman David Haythornthwaite and Chief Executive Neil Joy, was presented with his trophy.

Challinor said: “Of course it’s nice to get recognition on a personal level, but ultimately being successful is a massive team effort, on and off the pitch.

“Our biggest achievement of the year was that league trophy sat in the corner of my office, because that was a culmination of years of hard work. Everyone here has played their part in that.

“To get individual awards is great too, but we wouldn’t have won any of the trophies or awards last season by working alone. There are lots of people here responsible for everything we have achieved.”