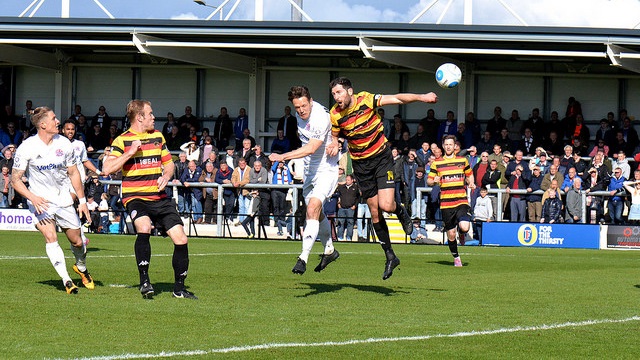 The Coasters needed a injury-time leveller from Matt Blinkhorn to earn a late point and Challinor hopes that his side take advantage of their ‘second chance’ against Boston United at the weekend.

Fylde will secure the National League North title should they emerge victorious – or at least equal Kidderminster’s result at Gainsborough – on the east coast on Saturday.

Challinor said: “It’s an opportunity that has passed us by. There’s a feeling of disappointment in the dressing room, which there should be. We’ve passed up an opportunity and it’s our own doing with that performance in the first half.

“We’re fortunate enough that we’ve got ourselves into a position where we have another chance and all of our focus will be on making sure that we take that chance.

“I suppose it’s a consolation that we know that we have another chance at winning the league. This feeling will hurt for a day or so but you’ve got to forget about things.

“For the first half today, we weren’t good enough. As a group, we could have affected that game more. I’ve been in a ground where teams have become league champions and you could sense that there was an air of “turn up here and we win.” I knew that would be far from the case.

“Bradford have an experienced team and some good footballers. To play on a surface like this, they loved it. We had to play at a tempo but sometimes the harder you try, the worse it gets.”