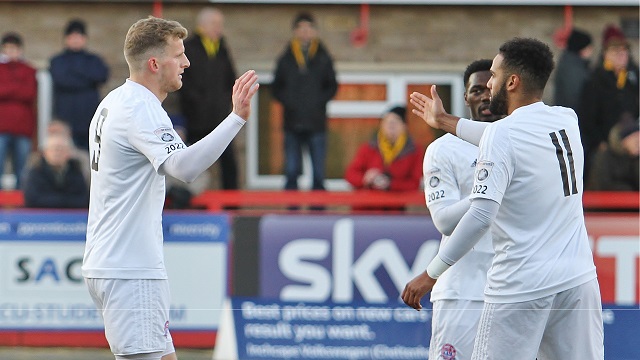 AFC Fylde boss Dave Challinor believes there is plenty of work to do despite the 3-2 victory over Gloucester City at the weekend.

The Coasters secured their place in the first round of the FA Trophy with a dramatic last-minute winner, but Challinor was more impressed with the result than the performance of his side.

“Winning football matches is a great habit especially when you perhaps don’t deserve to win them. We were awful today but we’ve got a player who was in magnificent form and when you get the ball in and around the box, there’s always a chance you can score.

“They were three different goals. The penalty in the first half was the first penalty we were given this season. We weren’t good but that was down to us and down to Gloucester. Neither side wanted a replay and we were obviously delighted that we won it rather than them. We’ll see who we get on Monday and go from there.

“I’m not happy with our performance but we have to use it as a learning experience and be better for it. The pitch wasn’t great and it didn’t really help us but we’ve got to be able to accept what our weaknesses are.

“At times, we need to be more functional and play forward and get second balls. It’s not the way that we want to play. I’m frustrated when we have to do that but it’s a means to an ends. It’s being effective especially when pitches aren’t great.”