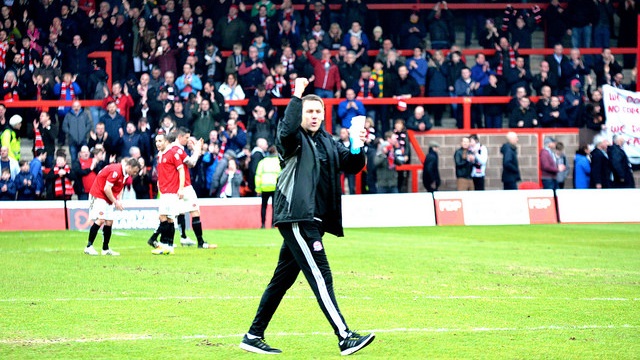 AFC Fylde manager Dave Challinor was delighted to pick up his side’s third consecutive victory with a 2-1 away win at FC United of Manchester at the weekend.

Goals from Tom Hannigan and Danny Rowe secured the points as the Coasters moved up to second in the National League North.

“It’s a tough place to come and a unique environment and atmosphere in our league. It was more like a cup game.

“We were a little bit stop start in the first half and we played a bit too safe. It’s always going to be a tough game between two side that like to play.

“But in the second half I thought we really stepped it up and for 25 minutes we were fantastic. We should have scored a couple more before they scored and killed the game off.

“We are delighted to have come away with the three points and although we had to rely on Ben Hinchliffe making a fantastic save at the end, I thought we thoroughly deserved it.

“We defended brilliantly and I thought our two centre-halves were outstanding. We chose to go with our most experienced side for the match because of the atmosphere. A couple of lads missed out, including young James Hardy, and they were unfortunate, but this was probably the worst game to throw a young lad in to.

“We thought he would be in and out of the team this season, but he has done exceptionally well recently and he is right in our plans.”