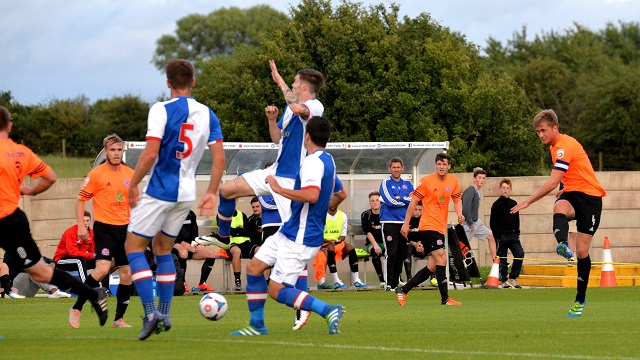 AFC Fylde boss Dave Challinor was pleased with his side after they recorded their third consecutive pre-season victory.

The Coasters saw off Blackburn Rovers’ development squad courtesy of a last minute Stephen Crainey free-kick and Challinor was proud of his exhausted troops.

“We had a tough couple of days leading up to the game and that showed. It probably wasn’t ideal playing a game so soon after Monday’s army training camp because it was so demanding.

“Out of possession we did well but I didn’t think we were great with the ball. We haven’t done much work on that as of yet and now that side of the preparation will start.

“It was important that we didn’t pick up any injuries because there were some really tired bodies out there. Plus, to keep a clean sheet and nick it at the end was very pleasing.

“There wasn’t a great deal in the game and in fairness they probably had more clear cut chances than we did but it was another good work out for us.

“They are a good young side and the first team manager Owen Coyle was there having a look at a few of them so that shows how strong some of their lads are.

“The game was played in good spirit and we will take a lot from it. It gave us a chance to get Monday out of the lads’ legs and they will feel a lot better for it.

“Crains has been practicing his free-kick a little bit and putting them in that top corner. I don’t think he could have placed it any closer to where the last one went.”