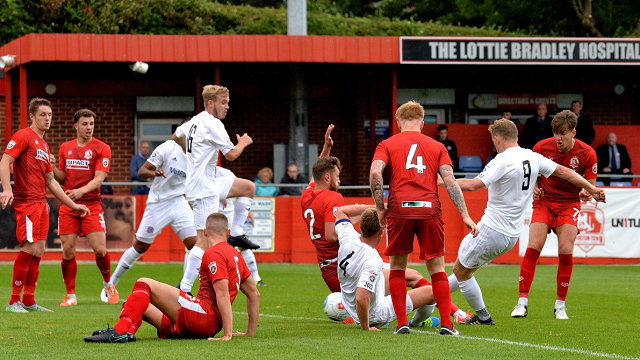 AFC Fylde manager Dave Challinor was delighted to secure back-to-back away victories despite a disappointing first-half showing at Alfreton yesterday.

Trailing 3-2 at half-time, three goals without response after the break earned a 5-3 triumph in favour of the Coasters – their third in four league games so far this season.

“It’s a win, that’s the big thing. To score five goals is great and to create the amount of chances that we did as well was fantastic.

“I was obviously not happy at half time and I had a right go because defensively we were all over the place. We said at half time that if we kept the ball out of our net we’d have a good chance of winning.

“We needed to dig in in the second half and show a reaction. I give massive credit to the players and they deserved to win.

“I don’t think the wind had a big impact but I suppose if the wind is straight down the pitch, it can be a problem. It was swirling though and it was poor defending from both teams. We scored first at a similar time today as we did against Altrincham but there were signs that defensively we were just far too open.

“We were making poor decisions and ultimately we’ve given really poor goals away which put us on the back foot. At half time, it wasn’t a case of me giving out any tactical information, we just needed to be better. We needed to be more aggressive in terms of us attacking the ball and stop giving away cheap free-kicks.

“If we do that, we’ve always got a chance because of the attacking players that we’ve got on the pitch. It was a lovely pitch and once we got the goal early in the second half, we were really in the ascendancy. In fairness, apart from probably one or two occasions crosses or free-kicks came into our box, I think we dealt much better with them.”