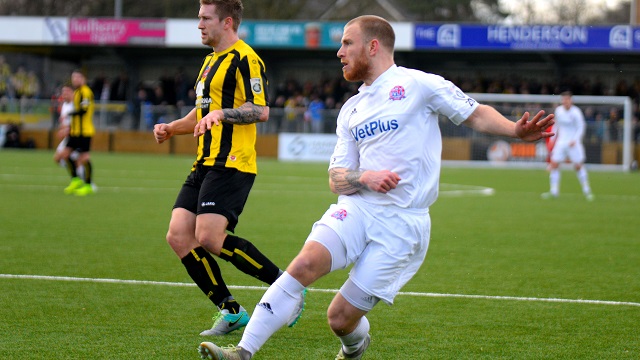 AFC Fylde boss Dave Challinor has been boosted by several of his injured stars returning to training this week.

The Coasters have been plagued by injuries this season but Challinor was positive ahead of this weekend’s huge National League North clash against Darlington.

“It’s not looking too bad on the injury front – it’s good news with most of them. The game may come too soon for a couple but we will make that assessment at the end of the week.

“Josh Langley has trained this week and David Morgan will potentially join in today (Thursday). Dom Collins and Steve Williams have both trained too so it’s looking much more positive.

“We want everyone fit and we should be a lot stronger than we were last weekend.

“James Hardy played a few minutes against Kidderminster and Stockport and he was a little tender afterwards. But he played 45 minutes against Nuneaton and had no reaction at all. It will be great to have him back involved because he is a big player for us with his creativity and the positions he gets himself into.”

The Coasters’ backline has been the worst hit by the injury curse but Challinor is refusing to the defensive record on absentees.

“The defensive situation has been frustrating over the course of the whole season but we can’t come up with excuses. A couple of years ago we had the best defensive record in the league because we managed to get pretty much the same team out every week.

“This season we have had several injuries but we just have to get on with it. Every one of them is good enough to go in there and do a job. Changing the back four hasn’t been costing us goals, it has been down to individual errors.

“If everyone has the mentality that ‘over my dead body that ball goes in our net’ then you give yourselves a good chance, regardless of who we put out there.”