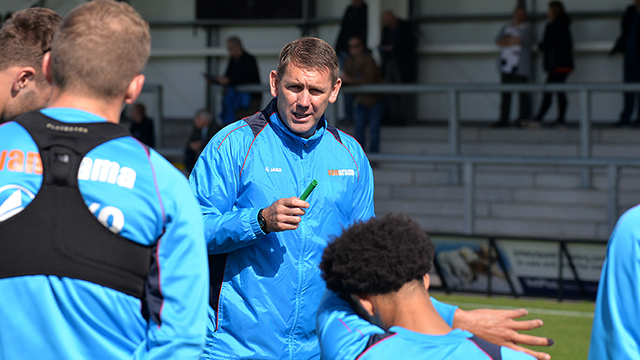 Chally pleased with run out

AFC Fylde boss Dave Challinor was pleased with the opportunity to give some of his squad members a run out against Fleetwood Town this afternoon.

The Coasters suffered defeat in the semi-finals of the Lancashire Senior Cup but Challinor was ultimately more concerned with minutes on the field than the result.

Challinor said: “We know we will have to make at least one change at the weekend with Sam (Finley) suspended and you hope that someone, or more than one, will stand out in a game like this.

“I wanted to see a performance that would make it difficult to leave someone out, so we have some decisions to make.

“I think the result proved that the lads out there needed a game and they will be better for it. They worked hard and the result, in all honesty, was by the bye.

“It was just a chance for the lads that haven’t featured as regularly to get minutes against an opposition of good quality.

“Fleetwood have a strong squad and there was no surprise that they had some first team players out there today.

“It also gave us the opportunity to look at a trialist and a few young lads and that’s how we have utilised the tournament as a whole. Plus it gave us a chance to look at the new boys Jordan (Flores) and Theo (Roberts) for the first time.

“We now have a few decisions to make for the weekend and hopefully we make the right ones and pick up three points against Hartlepool United.”