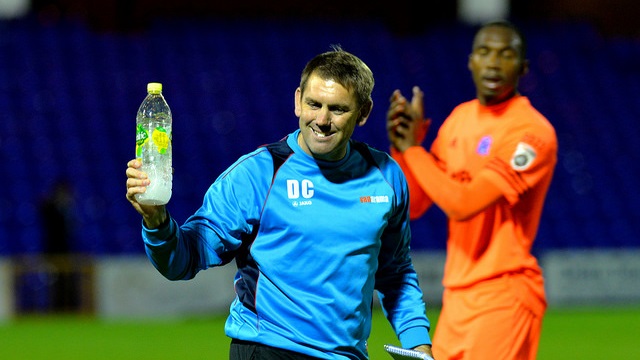 Chally not fazed by expectation

AFC Fylde manager Dave Challinor insists that his side’s unbeaten start to the National League North does not add any extra pressure.

The Coasters have won nine and drawn three of their opening 12 league games and are one of only four undefeated teams in the top six tiers of English football.

However, Challinor is not fazed by the mounting expectation on his table-topping troops.

“I don’t think there is more pressure than usual. Regardless of who you are playing or what the game is, every game is difficult. There will be games when you don’t perform – that was a case in point on Tuesday night against Stockport – and you have to grind out results.

“If we had have drawn the game then it wouldn’t have been the worst result so to win in the manner that we did and so late on was fantastic.

“Hopefully that will give everyone a big boost and this break has come at a good time for us. It gives us a chance to recharge our batteries whilst still remaining focused. We will have had 10 days between games so we can go to Kidderminster refreshed, flying and ready to go.”

Fylde sit three points clear of rivals Harrogate Town at the top of the league standings and Challinor admits that is exactly where they want to be.

“We are in the position we want to be in and now we have to deal with that. We are there to be shot at so it’s not going to be easy.

“We want to get out of this division and the best way of doing that is being top. Every other team in the league would swap places with us now, there’s no doubt about that.

“Being top is a challenge in itself and a pressure that players have to deal with, no matter what level you play at.

“There’s an awful lot more pressure if you are sat at the wrong end of the table rather than the top so we are very happy with our position. We have to thrive in our current position.

“We are by no means thinking that we are going to go the whole season undefeated but we do want to win as many games as we possibly can.

“We haven’t really set a specific target but the quicker we get points on the table the better. We have started well but there is more to come and there is an important month coming up with some huge matches against teams in and around us.”