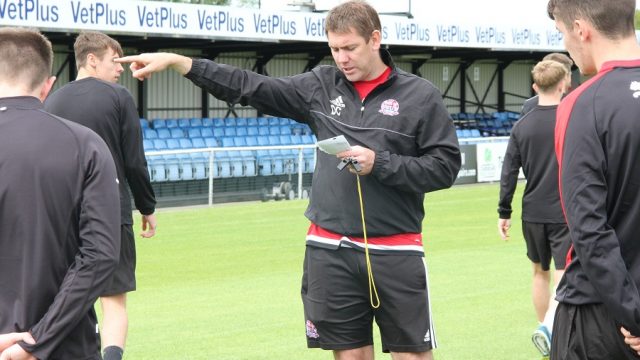 AFC Fylde boss Dave Challinor admits something has to change as his title chasers continue to leak goals ahead of tonight’s visit of Curzon Ashton.

Whilst the Coasters have netted an impressive 25 goals in their opening eight National League North fixtures, only Stockport have conceded more than Challinor’s side in the top ten of the league standings.

“We are getting away with it at the moment because we are still picking up points despite conceding too many goals. If we are winning 4-2, 5-2 then I am happy but when it is starting to cost us points then it’s causing a problem. Scoring a lot of goals is perhaps papering over the cracks defensively.

“If they do what we ask and it doesn’t work then I’m responsible, it’s my fault. Then either I change how I do things or my position changes and someone else comes in and does the job.

“If they are doing things that we are specifically asking them not to do then it starts to become an issue. We aren’t just telling them for the sake of it, we are saying it because we are seeing things that are going to cause us problems. We can see areas that other teams are going to try and exploit.

“We’ve got Rowey who can score goals, we’ve got Steve Williams who’s popping up with a few, we’ve got goals in James Hardy and Sam Finley and we’ve got Brendon Daniels to come back so we have more enough in the team to win games.

“Now we need to make sure we aren’t conceding them at the other end.”