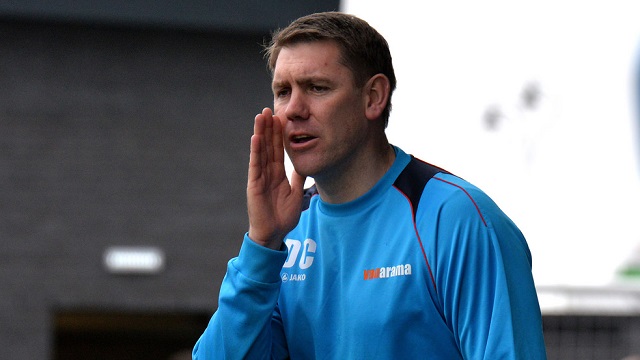 Chally keen to get over the line

AFC Fylde took a huge step towards securing the National League North title at the weekend … a fact not wasted on manager Dave Challinor.

The Coasters’ victory over play-off hopefuls Darlington on Saturday, coupled with Kidderminster Harriers’ shock home defeat to Halifax Town, saw Fylde extend their advantage at the top of the table to nine points.

Challinor has always maintained the fortunes of his own side are his primary concern, however admits he couldn’t help but take a sideways glance at the result of their title rivals on Saturday.

Challinor said: “I have to admit, with Kidderminster and Halifax playing each other, it was probably the first time I have asked about another result straight after our own game.

“Obviously my main focus was getting ourselves over the line against Darlington but it’s great at this stage of the season when you hear a result elsewhere has gone in your favour.

“Ahead of the weekend, we thought we would need to win five games from six and now it’s three from five to make absolutely sure. We will now be going all out to get those points as quickly as possible.

“Our aim is to win all five games but obviously it will take less than that now to clinch the title.”

After an injury hit campaign, Challinor was boosted by the welcome return of three of his established stars at the weekend.

Defensive duo Dom Collins and Josh Langley returned to the starting line-up, whilst midfielder James Hardy made his first start in over two months.

Midfielder David Morgan made a late cameo appearance on his comeback from injury, whilst deadline day signing Kieran Kennedy made his Coasters debut from the bench and Challinor is relieved that his injury concerns have eased at a crucial point in the season.

“It’s massive to have people back fit,” added Challinor. “We need everyone fit at this stage. We have struggled this season with continuity because of injuries. We haven’t really managed to get out a settled side all season, particularly a settled back four.

“We had to leave players out of the squad on Saturday which is tough but that is a good problem to have. We pick our squad on the basis of what we think will need for each specific game.

“James (Hardy) passed a late fitness test before the game. He then had a flare up of a back problem and you start to think things are conspiring against you. We got 45 minutes out of him but he was really struggling at half-time so we had to make a change. Hopefully he will be okay for the trip to Stalybridge.”