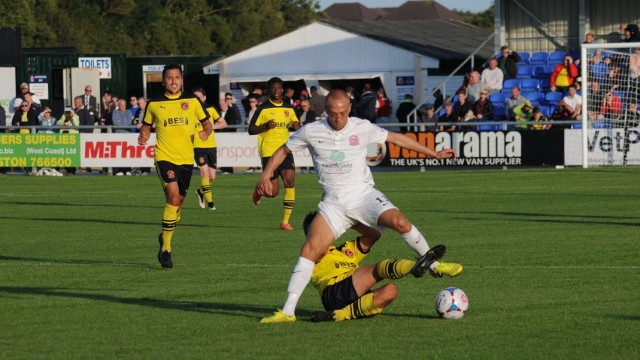 AFC Fylde boss Dave Challinor spoke to Ben Yaffe after Thursday’s 1-0 home win over Fleetwood Town in what was the first pre-season game for The Coasters.

It’s always good to off to a winning start in pre-season and especially against a Football League side, how did you feel the game went today?

It’s good yeah, it’s just about minutes for everyone really. It was a great workout for us against a higher level opposition that move the ball really well and it was good to test ourselves early on in the pre-season programme. Results aren’t important at this stage, it’s just about the minutes the lads have got in their legs to prepare for the new season. It’s always nice to win a game but today was more about them finding their feet and getting back into it.

It’s always difficult to tell in pre-season due to the number of substitutions and tactical movements during the game with not wanting to pick up any injuries. In the first half we did really well, we had to change our shape to counter what they were trying to do because the way they played with a diamond in midfield, if we hadn’t have matched it up, they would have completely overrun us and we wouldn’t have got the ball at all. It meant we were man for man and I thought they did a good job. The work rate the lads put in tonight was good and they’ll certainly feel it tomorrow but that’s what you want from a pre-season game. We’ve got to recover quickly and we’ll look forward to Sunday against Rochdale.

Dom Collins & Tom Hannigan seemed to form a good partnership at centre half, were you impressed by their understanding of each other despite it being only their first game together?

Yeah they did well. We changed to three at the back and I thought them two and Adam Sumner did really well. With Josh Langley and Brad Barnes not here for this game, we were a bit short of numbers at the back but we coped very well against a strong team in Fleetwood. We didn’t want anybody to play the full 90 minutes realistically and although Tom Hannigan played about 80 minutes, he was very good as always. The new lads have fitted in very well, they’ll add more quality to what we had last year in terms of depth. We’re a month away from the start of the season and we’ll look forward to the rest of pre-season with getting everyone the minutes they need.

Are you happy with what you’ve got in terms of player personnel or are you actively looking to bring in a couple of new faces before the season starts?

If we didn’t bring anyone else in, I’d be happy with what we have got but there is certainly still opportunities for people to come in if they impress enough. We’ve tried to bring in a couple of lads over the past week or so but it wasn’t to be but we’ll try to strengthen where we can. If the people we want become available then that’s great but I’m more than happy to go with what we have if that is the case come the start of the season.

Moving into the next game against Rochdale, will it be much of the same as we’ve seen today against Fleetwood or will you look to shake things up a bit?

Yeah it’ll be much more of the same I would have thought. It’s about getting the players the right number of minutes. Some of the lads who didn’t start today might start on Sunday but in the end it doesn’t really matter at this stage. Hopefully we’ll have Josh Langley back, but Brad Barnes won’t be back until Monday at the earliest. In the forward and midfield areas of the pitch we have lots of options now which is great, we are just maybe a player short at the back depending on how we play. Formation will be similar as we always look to play the same way unless the other side is dominating the game, but it will be much more of the same yes. It’s another good test for us and we can’t wait.

The next pre-season game is this Sunday, 12 July against Rochdale at Kellamergh Park. Kick-off is 2pm, with tickets priced at £8 adults, £5 concessions and free to all U16’s.