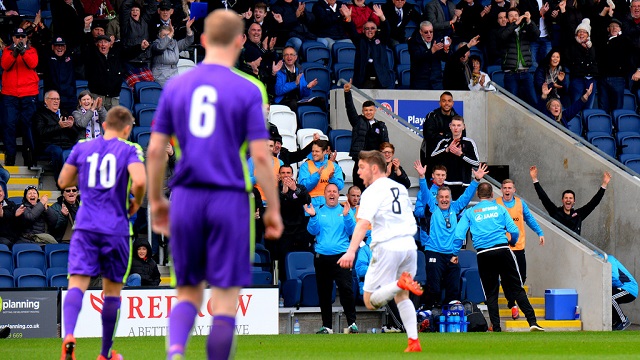 AFC Fylde boss Dave Challinor believes Saturday’s 4-1 victory over Darlington was one of the performances of the season.

The Coasters moved nine points clear at the top of the National League North with just five games to play and Challinor insists that his side proved a point with a dominant display.

“It was a brilliant performance. In the end, we ran out convincing winners but it could have been a very sticky game. We thoroughly deserved to win and it was the best that we’ve played for a long time. It was a complete team performance. There were lots of tired bodies out there and to get the third goal after they scored gave us a massive boost. It was a game that had everything.

“You’ve got to have determination to get that result out your system. Darlington had a game in on Wednesday and whether they trained on Thursday I don’t know. With us being in full time, it gives us an advantage to get things out of our system, whether that’s a game, a result or a performance. You have to take advantage of that.

“We are in a great position now. We can talk in the dressing room about us being top of the league but ultimately, you’ve got to go out and prove that and we have.”