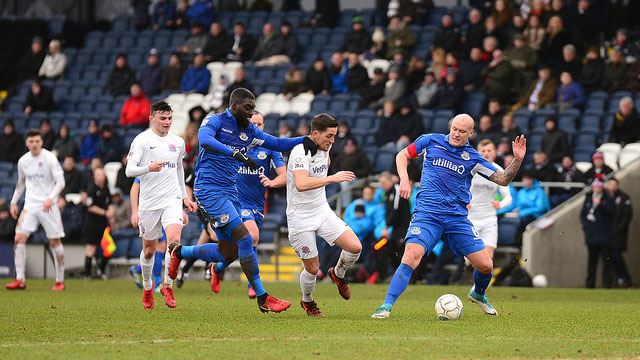 AFC Fylde boss Dave Challinor believes his side did ‘more than enough’ to take maximum points from yesterday’s 2-2 draw against Eastleigh.

The Coasters registered twice as many attempts on goal as their opponents, but needed a late equaliser from substitute Henry Jones to earn a share of the spoils.

Fylde remain ninth in the National League standings, a point outside the play-off places.

Challinor said: “Going in to the last five minutes 2-1 down, a point potentially looks like a good result, but on the balance of the game, it’s two points dropped.

“We started slowly and for the first 20 minutes we were like a rabbit in the headlights. We didn’t look comfortable and the lads didn’t back themselves to do what I had asked.

“Their goal gave us a kick up the backside and second half it was one-way traffic and we got ourselves level.

“We were on the front foot and then we give a horrific goal away. We created numerous chances and on another day it could have been 6-2.

“It was reminiscent of our performances earlier in the season where we were playing well and doing more than enough to win games but not getting the right result.

“Once we got going and started to play, we looked a very good team.

“The substitutes (James Hardy and Henry Jones) make a big difference and they did really well. They worked hard and it will have done them the world of good.

“We got the ball into some fantastic areas but we were trying to force it a little too much at times.

“We more than deserved a point from the game but it should have been three.”