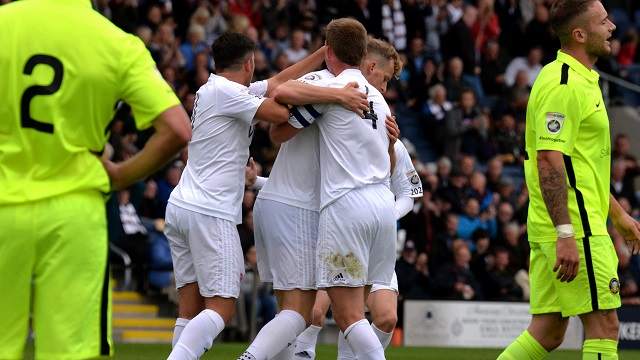 AFC Fylde boss Dave Challinor believes some harsh words at half-time helped his side come out on top against Gainsborough Trinity on Saturday.

The Coasters trailed at the break after a slow start, but three second half goals completed a fine comeback as Fylde strengthened their position at the top of the National League North.

“It’s obviously great to win as always. There were a few harsh words as you can probably imagine at half time and you look for a reaction. It’s sometimes difficult to know the right way to go about it and you just hope you get it right.

“I wouldn’t be doing myself justice and doing the players justice if I didn’t get this group to achieve their potential. Sometimes you need to let them know exactly where they stand and we did that at half time.

“We scored at good times to be fair in the second half which has given us time to push on. To get the second goal so quickly after the first completely changes the complexion of the game. We managed a third too but we need to get better and we know that.”

Challinor was also pleased that new boy Dan Bradley marked his debut with a goal.

“I’m delighted for Dan to score because it’s always tough coming into a new team. It’s been a drawn out process and obviously we only got things done on Thursday. He trained on Thursday and Friday and looked really bright.

“Things weren’t quite going for him and it looked like it was going to be one of those days but he kept plugging away. We’re asking him to play in a different position in a different team that play a different way.

“You always want to do well on your debut and sometimes you can try too hard. He’s a top player and he’s shown that already in the two days he’s been with us.”