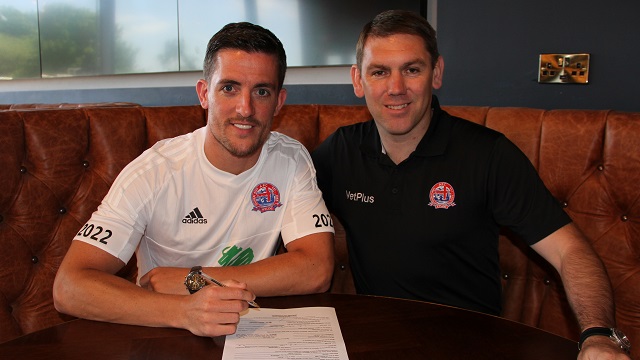 AFC Fylde manager Dave Challinor was delighted to secure deals for two key players last week as the Coasters continue to build their squad for next season.

Midfielder Andy Bond has joined from League Two side Crawley Town and the squad was further boosted by the news that defender Josh Langley had signed a new two-year deal with the club.

Challinor admitted that Bond has been a long-time target for the Coasters and believes that the 30-year-old will add some vital experience to the squad.

“Andy is someone we have been aware of for a while now. He spent some time with Chorley recently and he is a good friend of Colin Woodthorpe (assistant manager).

“There was a clause in his contract at Chorley that allowed him to go and join a Football League club and he moved to Crawley at the start of the year.

“However, he was keen to return up north to be closer to home and that helped us to do a deal. The opportunity to remain full-time was another bonus for him. There is also the potential for him to transfer across into some coaching at some point too. We may use him in the Academy programme and his experience will be massive for us.

“Andy can play a few different roles depending on how we line up in midfield. We have a lot of talented younger players but we don’t have many natural leaders within the squad so that is something we are looking to add. That doesn’t mean people who shout and bawl but people who lead by example and Andy fits that mould.

“He will give us some grit in the middle of the park, but more importantly he can play and that fits in with what we do. Our philosophy won’t change but we have to constantly evolve.

“The big thing for us when we are looking at new signings is mentality. We want lads that have high standards and that also demand that of their team-mates.

“That is something that as an ex-player you take for granted but it isn’t always the case with every player. People may argue that is why some are only playing part-time and they don’t become professional footballers.

“With our transition to full-time we need a switch in mentality and players who embrace that so it’s important we bring in the right characters.”

Another decision that Challinor will have to make ahead of the season will be his captain for the forthcoming campaign. Tom Hannigan departed for Altrincham a fortnight ago whilst former captain Brad Barnes has also moved on however Challinor isn’t overly concerned on who will wear the armband next term.

“Within a couple of weeks of pre-season we will have a better idea of the next captain. Natural leaders will come to the fore and stand out and we will take it from there. Does it make a huge difference who is captain? Not really. We want everyone to step up on the pitch and hopefully they will do that.

“I was a captain for most of my career and it’s obviously a great honour but with that comes responsibility. I have an idea of candidates and I think it will probably become quite obvious early in pre-season.

One man that could be in the running for the armband is defender Langley and the manager is delighted that his star defender has committed his future to the club.

“The one surprising factor for me with Josh is that there was no interest from Football League clubs.

“He isn’t your typical ‘head it, kick it’ centre-half, he’s an accomplished footballer. I think he needs to be in a team that wants to play and the majority of the teams in this league and the league above don’t really do that.

“Josh is only 23 years old and still has the potential to improve further still. He is young for a centre-half, he’s still learning and still making mistakes, but to be able to work with him full-time will make a massive difference.

“He probably needs to work on the ugly side of his game. There are times when you need to just defend which is perhaps against his nature, but if he can get a balance then he will become a very good player and I’m sure teams far higher up will start looking at him.

“He has found a team that suits his style and he likes the freedom we give him to go out and play. Now that he has signed his new deal he has to show the drive to be the best he can be and I’m sure he’ll do that. I think we will see a stronger, more accomplished centre-half next season.”