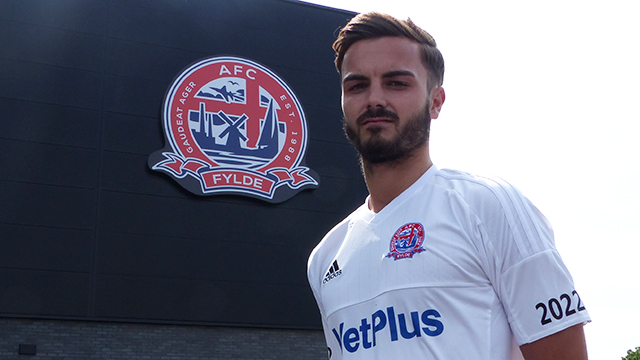 The 23-year-old midfielder became Challinor’s fourth signing of a busy summer after completing his switch from Bangor City earlier in the week.

The Coasters boss admits he keeps a keen eye on the Welsh Premier League and says that Jones was the one that stood out last term.

Challinor said: “Henry is one that I have been aware of for a while now. I live close to the border of Wales so that league is one that I know quite a lot about.

“I know most of the managers over there and speak to them quite regularly. Having previously been at Colwyn Bay, I have a good relationship with clubs over there. They are always looking at players that they can take over that way and vice-versa.

“We are regularly looking at the best players over there and Henry was one that kept on cropping up. We have watched him play and decided to meet up and have a chat to see where he was at.

“He came in and was unbelievable in the way that he spoke about football and his own ambitions. He is really driven and wants to play at the highest level.

“In a good way, he wants to use us as a stepping stone to bigger and better things and that is exactly what we are looking for – players with ambition and a desire to progress.

“When he saw what we had to offer, it wasn’t a difficult decision. He is already used to living away from home so it’s not an issue for him to relocate up here and really commit to making his move a success. It was a really simple conversation with him and his agent and we are delighted to have got the deal done.”

Challinor’s side had no problems finding the back of the net last season, bagging an incredible 109 goals on their way to National League North glory, and the manager believes his new man will only add to his already potent attacking force.

“We are really looking forward to working with him. Technically he is an outstanding player and I’m sure he will fit in very well with the group.

“When he was at Swansea he played in a deeper role, but last season he was pushed further forward and flourished.

“He will create and score goals, he’s one that can pick a pass and finish so he will be a big asset for us.

“Henry has now had a season of men’s football after a long time at Swansea and he is ready to kick on further still. He has learnt an awful lot in the last 12 months and next season will be another big step up for him.

“I’m confident that the way we play will bring out the very best in him. It’s now his responsibility to force his way into the team.”