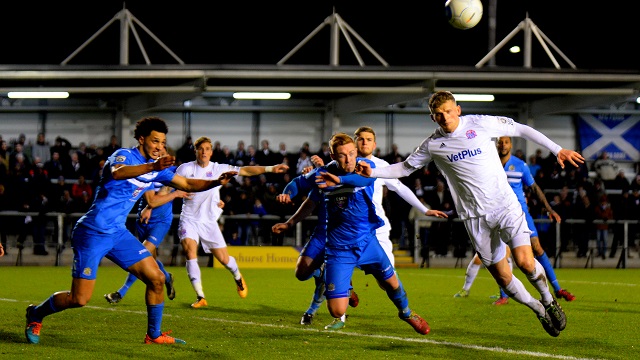 The Coasters picked up a valuable point in a dramatic encounter with Kidderminster Harriers at the weekend and Challinor admits he would have taken two draws over course of the last few days.

“It’s not like us to draw 0-0!” said Challinor. “It was a close game, there was nothing in it really. If someone had offered us a clean sheet before the game, I’d have taken it. In a weird kind of way over the past two games, two points were arguably better than three depending on how they came about. We’ll take the draws and we’ll move on.

“To get through those two games undefeated is pleasing. We always knew it was going to be a close game but our decision making in the second half cost us getting more from the game. We just couldn’t find that bit of quality in the final third to create a decent opportunity.

“We’d have loved more than two points from the last two games but we’re not disappointed. We said at the start of the week that two points was the minimum really and we’ve come through the games undefeated against two tough teams. We’ll let everyone else worry about what we do and we’ll just focus on ourselves.

“I’m the sort of person that expects our rivals to go into every game and win. If they don’t it’s a bonus. I suppose Kidderminster will see their last minute winner last night as a little bit of justice. We’ve just got to look at us and we are still in a really good position.”