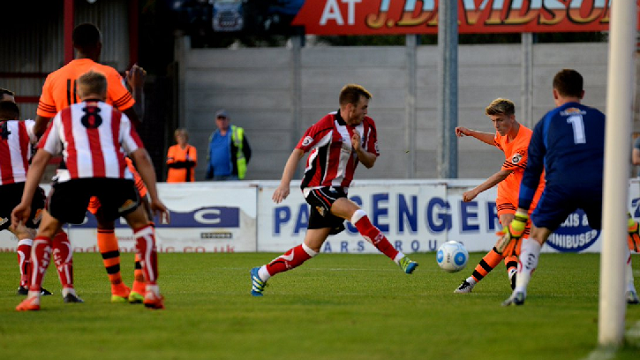 AFC Fylde boss Dave Challinor was delighted with his side following their demolition of Altrincham last night.

The Coasters hit an incredible six goals without reply to move up to third in the National League North and Challinor could not fault his troops.

“I can’t pick any holes in that performance, particularly in the first half. To get the amount of goals that we did, the game was over by half time.

“We set the challenge of not conceding in the second half and that was very pleasing. They tried to make it more difficult after the break by getting men behind the ball, but it was a really good performance from us.

“This is a very tough division and we are still a work in process but we were outstanding. We were very effective too. We put the ball in to good areas, got people into the box and things just went right for us.

“When we are in that kind of form we are very hard to play against and we need to make sure it’s not a one-off and we continue it at the weekend against Alfreton.

“We have been encouraging Bohan (Dixon) to get forward more this season so it was very pleasing to see him grab his second goal from inside the six yard box.”