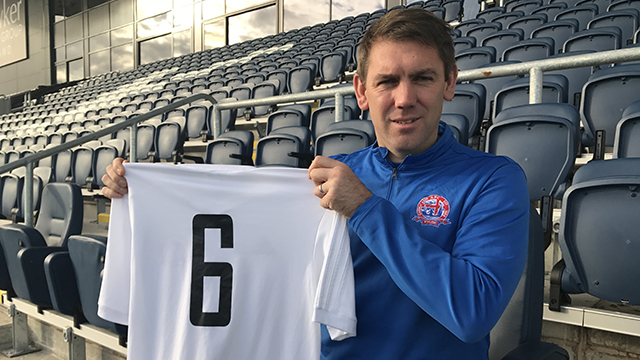 AFC Fylde boss Dave Challinor is hoping to celebrate his anniversary with the club with some FA Cup cheer this weekend.

Challinor, alongside right-hand man Colin Woodthorpe, took the reins six years ago today after a fruitful spell in charge at Colwyn Bay.

The former Tranmere Rovers star, has enjoyed unprecedented success with the Coasters since his arrival, culminating in promotion to the National League as champions last term.

Whilst citing the club’s ambition as the key reason for making the move to the Fylde Coast, Challinor admitted he could never envisaged how far the club would come during his tenure.

Challinor, three-time winner of the league’s Manager of the Year award, said: “All of this was part of the plan but the way life is, things don’t always follow that!

“When I arrived, we were two divisions below where we are now and the aim was to get ourselves up the ladder and that has happened and continues to happen.

“I look back on that with a sense of pride because the club really has moved forward during the time we have been here.

“Our main job has been to progress on the pitch, but the club has also made a huge strides behind the scenes.

“I remember going to Kellamergh Park for the first time back in the day. There was no stand at either end and no terracing, so to now have that as a training base and a stadium like Mill Farm as our home is fantastic.

“Couple that with the Education Centre and the 3G pitches that are nearing completion and we are really set up for success.

“When I took the job, all of this was just a dream but lots of hard work from a lot of people has put us on the right track. Now is the time to enjoy it but at the same time we haven’t finished yet. We still want to go further and we know we have to improve.

“It’s still exciting for me, six years down the line, and hopefully there are many more successful years to follow.

“We are in a good place at the moment. We backed up the win over Wrexham in the last round of the FA Cup with consecutive victories in the league and it’s amazing what a couple of wins can do for your confidence.

“We have a huge FA Cup game against Kidderminster on Saturday and if we can get through to the second round then it represents another big milestone for the club.”