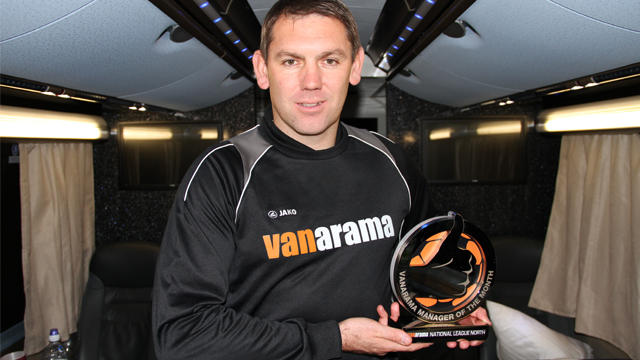 Chally at the double!

AFC Fylde manager Dave Challinor has been named the Vanarama Manager of the Month for the second month in succession.

Challinor has guided the Coasters to five consecutive victories this month in all competitions, conceding just one goal in the process.

Fylde have seen off AFC Telford (1-0), Corby Town (2-1) and Stalybridge Celtic (5-0) as they climbed to the top of the National League North table, whilst they have also progressed to the first round of the FA Cup with victories over Coleshill Town (9-0) and rivals Barrow AFC (1-0).

Challinor said: “I don’t really see this as an individual honour, it’s more of a collective award. It takes a massive team effort to accomplish what we have done so far this season. This is well deserved for all the lads’ hard work over the last month.

“To win it in September was great and we have kicked on since then winning all our games in October. Within those games we have played a National League side and one match with 10 men for 75 minutes, so it’s been a really good achievement and a nice boost going into the weekend.”