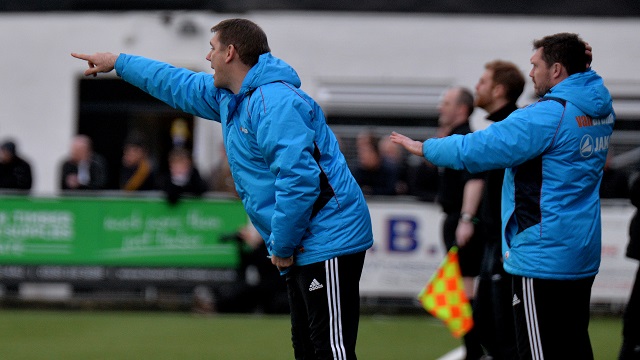 AFC Fylde boss Dave Challinor believes his title-chasing side are one step closer to their promotion dream.

A late show at Harrogate Town last time out secure a crucial draw to move the Coasters 11 points clear at the top of the National League North table.

Fylde have suffered play-off heartbreak in each of the last two seasons and are looking to make it third time lucky as the season reaches its climax.

Just 10 games to go, the Coasters are in pole position for the league title but Challinor insists his focus lies solely on Saturday’s trip to Gainsborough Trinity.

Whilst Gainsborough currently sit bottom of the form table over the last five games, with just one point from a possible 15, Challinor is wary of their struggling opposition.

“We cannot afford to get ahead of ourselves, that’s when complacency creeps in and we can’t allow that to happen when we are in such a strong position.

“Last weekend is gone now and it’s another one chalked off so we have to refocus on this weekend’s game at Gainsborough now.

“It will be another tough one as we go there with everything to lose and nothing to gain because everyone will have us down as favourites to win. We have to make sure we cope with that and come out the other side with the right result.

“Regardless of their position, it’s not an easy place to go and we have dropped points there in recent years so we will be wary of their threat.”

On a day where none of the top six clubs won, Challinor admits that only time will tell how critical Matty Hughes’ late leveller at Harrogate will prove to be.

“Come the end of the season, we will see how important that point will be.

“We are one game closer to where we want to be and thankfully other teams have been doing us a favour recently.”

However, the manager is keen for his defence to tighten up: “Whenever the ball is on the pitch, we have to see it as a threat to our goal.

“We have to be aware that a goal can come from anywhere and use that fear to spur us on. Our game is based on free-flowing attacking football but at the same time we have to be cautious.”

Attendances at Mill Farm have sky-rocketed this season, averaging over 1,800, and Challinor is also delighted to see the club’s away following on the rise.

“We are building a real fanbase. At home, crowds have been catapulted well beyond what we thought we would get. And now away from home we are getting more and more fans travelling and they really get behind the team.

“Hopefully they travel in numbers again this weekend to Gainsborough because we really need their support, particularly at this stage of the season as we look to get over the line.”