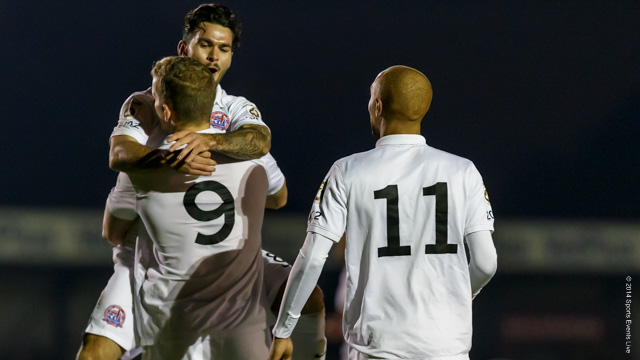 We ground out a win which was pleasing as we played better than we did tonight against Lowestoft, Stalybridge and Guiseley and came away from those games with nothing.

To win the game was massive as I’d hasten to say most games in midweek are a little bit tighter but having seen Oxford’s result against Boston that sort of blows that up in smoke, but no, this was a tight game.

I thought, without ripping them to pieces, we were comfortable for 37 to 38 minutes, get a goal in front and then had a mad six minutes if you like where they put us under pressure, get an equalising goal which is an absolute worldy and then, all of a sudden, we concede a penalty. Whether it’s a penalty or not, whether it’s inside the box or not is by-the-by, but Ben makes a good save and at half time you’re thinking you’ve dodged a bullet.

In a similar way to the Hednesford game you’ve got to come out for the second half and go and win the game again and it was a really good response in the fact that we score a really good goal.

I wouldn’t say we aren’t brave enough, we just probably didn’t take enough risks and I’m the first for saying keep things tight, especially in the second half the way they settled with the diamond and our full-backs were the ones that were out and if we’d have been a little bit more safe in possession and took it on a bit more we could have gone in a little bit more.

Instead we got embroiled in a little bit of an arm wrestle and that’s credit to Bradford but I felt we didn’t play as well as we’d have liked but we defended fantastically and deservedly won the game.

The first goal is always important as it changes what teams do at times and in fairness to them they were patient and didn’t really go anywhere, they played and got the ball forward and relied on the front two to cause us problems.

Like I said they scored an equaliser from nothing really and even then they stayed patient so we knew it was going to be tough to break them down.

We managed to score a second goal and from then you’ve got to be looking to kick on but I think we got a little bit edgy in the fact that we didn’t get on it as much as I’d like but we still defended really well.

I thought the two centre halves were fantastic and Ben, when called upon, I don’t remember a huge amount of saves he had to make in the second half, but them three looked really solid in there.

It was the first time we had played against a team with a diamond where we were sort of outnumbered in the middle of the park and certainly left our full-backs open which should have created overloads down the sides but for one reason or another we just weren’t that clinical.