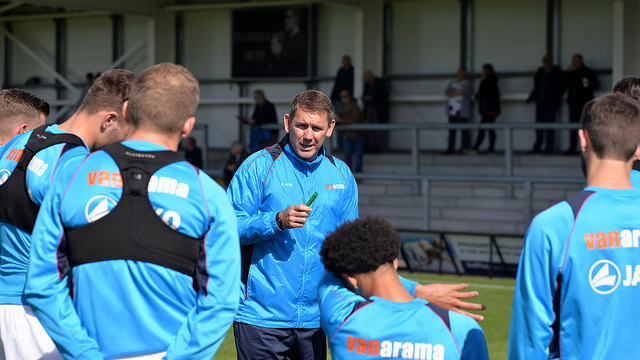 AFC Fylde manager Dave Challinor believes the Emirates FA Cup comes at a good time for his side.

The Coasters host National League high-flyers Wrexham this weekend in the fourth qualifying round of England’s most prestigious cup competition.

Challinor’s side have enjoyed quite the love affair with the FA Cup having reached the first round in three of the last five years, most recently in 2015 when they travelled to the capital for a match up against League One giants Millwall.

On the league front, Fylde have endured a mixed start to life in the fifth tier of English football and find themselves in 19th place following Saturday’s narrow defeat at Sutton United.

Challinor believes the FA Cup comes as a welcome distraction and is keen for the Coasters to extend their FA Cup romance.

Challinor said: “The draw is what it is, but I think the cup has come at a good time for us. It gives us time to get more bodies in before the league starts up again.

“That said, the FA Cup is a competition that we want to do well in. We have reached the first round proper on three occasions already and we are just one round from achieving that again.

“We want to win and get in that first round and hopefully draw a big team. If we get a favourable draw against a ‘lesser’ side then great and we would do what we can to get into the second round. That’s the idea.

“We still have a huge test ahead against Wrexham first but I want us to go out there and enjoy it.

“We have to put into practice what we talked about in the changing room after the weekend’s game at Sutton and all this week.”

Challinor will be without midfielder Lewis Montrose for two matches following consecutive red cards, but is hopeful that defender Jordan Tunnicliffe will shake off the injury that forced him off against Sutton.

Challinor added: “Jordan got a whack on his calf and the lad’s boot scraped down his achillies. We will have to see with him but hopefully he should be okay for the weekend.

“We haven’t got many defensive options and that is something we are hoping to rectify.”