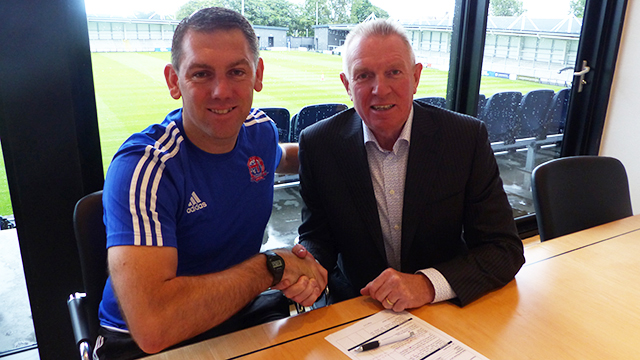 AFC Fylde are delighted to announce that manager Dave Challinor has put pen-to-paper on a new two-year deal with the club.

Challinor was appointed Coasters boss in November 2011 and has guided Fylde to promotion on three occasions during his 313 games in charge since joining from Colwyn Bay.

The 41-year-old, who was named Manager of the Year for the National League North after leading his side to title glory, holds an impressive record at the club, lifting four trophies and boasting a 60 per cent win ratio.

Challinor is now relishing next season, the club’s first in the National League: “This has been in the offing for a while now and I’m delighted to get it sorted. I always wanted my future to be here.

“It wasn’t a difficult process and now we can fully focus on what will be a really exciting season for us.

“When we came out of the Evo-Stik league in to the National League North it was a step into the unknown but we competed straight away.

“We would have liked to have climbed out of the division sooner than we did but sometimes things work out for the better.

“Had we gone up twelve months ago during a huge transitional period for the club, it may have been difficult. We had a lot of new fans and had we been losing games then we wouldn’t have developed that winning feeling that we have done well to create.

“To have a season at Mill Farm as a full-time club and settle in before getting promoted will probably prove beneficial in the long run.

“We still have some big challenges next season in a new league against a lot of teams that we haven’t played before but I feel we are well prepared.

“We have had that winning feeling throughout my six seasons here and I don’t want that to change next season.

“I think the two extra play-off places in the National League are great for the teams coming up and give us something to really focus on. How you start the season is really important and you always need a bit of luck. We will be a bit of an unknown quantity to a few teams next season, although the higher you get, the more teams do their homework.

“We have to continue improving, individually and collectively, and if we do that then I firmly believe that we will more than compete.

“We will have to show the resilience and the ability to grind out results that we did last season.

“We have a younger group than last season but we won’t be overawed because we have lads that can certainly play at this level, if not higher. They have been given the opportunity to do that here and we are very much looking forward to the new campaign.”

Chairman David Haythornthwaite was delighted to extend Challinor’s deal: “Dave is probably one of the longest serving managers in football, which is some achievement in this day and age. However, it is more than deserved with him taking the club to its highest ever level.

“I’ve had a great relationship with him ever since he walked through the door and it is therefore great to offer him a further two-year contract which will extend his stay with the club to eight years.

“We’ve entered a very exciting period for the club and with Dave at the helm I’m sure we will have a fantastic first season in the National League.”