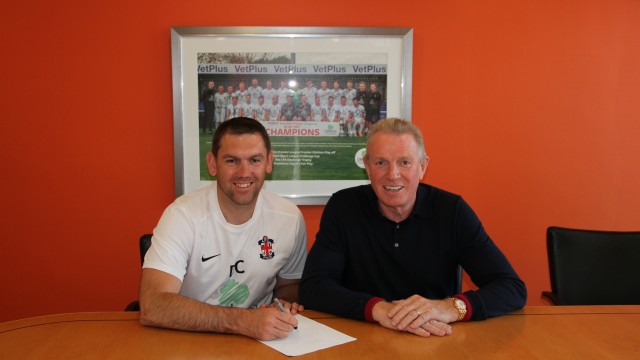 AFC Fylde are pleased to announce that First Team Manager, Dave Challinor, has signed a two year extension to his contract which will keep him at the club until the end of the 2016/17 season.

“I’m delighted to announce that I have agreed an extension to my current contract” Said Challinor. “With only a year remaining on my current deal I was keen to sort out my future and commit to the club if that’s something that David and Dai were open to.

“I’ve loved my two and a half seasons at the club.  Yes they’ve been successful in terms of achievements and long may that continue but more than that, I’ve certainly developed and learned as a manager and working with and alongside David and Dai will only aid that progress.

He continued by saying: “Without doubt, I want to manage as high as I possibly can with the obvious aim being full time, something that I will be next season and also to get into the Football League.  I have no doubt that opportunity lies here and that is why I was more than happy to commit my future.  I can’t wait for pre season to get started and look forward to an exciting season ahead.”

AFC Fylde Chairman, David Haythornthwaite, was also pleased that his First Team boss put pen to paper and added: “We are delighted to extend Dave contact .We have had a very good relationship  with both Dave and Colin from day one and both understand the long term plans.  Dave has got us within touching distance of where we want to be and the next step is the completion of the new ground which will start in September.”

A hugely successful 2013/14 season was capped off with the announcement by Fylde Borough Council’s landslide decision to give the go ahead for the building of AFC Fylde’s new stadium earlier this month.

Challinor added: “The reason I came to the club back in November 2011 was to take this club into our new stadium.  It’s taken longer than we’d all have liked and ideally the Wrea Green development would have been successful and we’d have been moving there.

“In hindsight, the refusal of planning permission on that site has without doubt given us a much better site in terms of location and the plans that were passed just over a week ago now are amazing and they will take us into a different place in terms of a football club.

“The next twelve months promise to be really exciting and moving into Mill Farm will be another new beginning in what has been a surreal few years. The move obviously coincides with us playing at the highest level the club has been at and it’s important that during the next twelve months, we consolidate on the already strong infrastructure we have in place so that when we move it’s seamless into Mill Farm in terms of our plans. I was sold the vision and ambition that David and Dai had when I moved here and I want that to continue.

There was even more good news for the club when Challinor was rewarded for guiding The Coasters to their most successful season ever by picking up the Northern Premier League’s Manager of the Year Award at the annual dinner held at the Hilton Hotel in Blackpool on Saturday night (see separate news story).