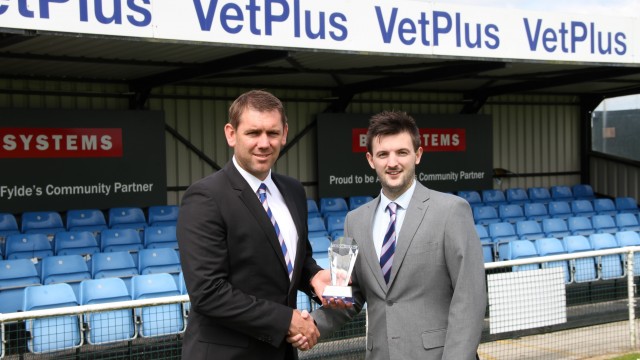 But NPL Chairman, Mark Harris, said that Challinor’s feat of guiding The Coasters to two successful cup finals, winning promotion to the Conference North via the Premier Division Play-offs and adding the President’s Trophy for the club with the best fair play record over the whole season made him the obvious choice for the award.

Challinor said of receiving this award: “I was delighted to receive the news from David on Saturday night that I’d received Manager of the Year 2013/14.  Unfortunately I was unable to attend on Saturday as I was best man at my friend’s wedding, but it was fitting that Col was in attendance and able to accept the award as he has played a massive part in what we’ve achieved so far as a management team.”

This will be the second time Challinor’s name will be engraved on this trophy whilst with AFC Fylde after he won the award after the Division One North title winning campaign of 2011/12.

He added: “To receive Manager of the Year is a huge honour but to be the winner for the second time in three years in amazing.  It’s just rewards for everyone really for the amount of hard work that goes on behind the scenes and something for us all to celebrate.

“I can’t thank the Evo-Stik League enough for this great honour, it’s been a great league to be involved in and personally after four promotions from the leagues it will be good to finally get back into the conference.

“I’d like to thank David and Dai for their continued support and most of all thank the players.  They’ve all really bought into our philosophy and expectations and this has reaped significant rewards and long may that continue.”

It was a brilliant night all round for The Coasters as they were once again handed the NPL Premier Division Play-off vase as well as the NPL President’s Cup and the Doodson Sport League Cup as a reminder of a hugely successful season.