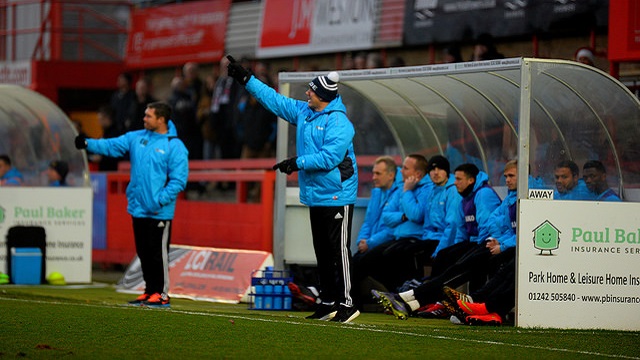 The Coasters put the FA Trophy disappointment behind them with a convincing 5-1 win at Whaddon Road and Challinor was delighted with the performance.

“I suppose a lot has been said over the last few days after Tuesday night,” said Challinor. “We felt let down and we felt that we let people down with the performance. Saturday was the completely opposite feeling. A feeling of pride for every single one of them.

“They worked their socks off and we’ve shown the quality that we’ve got. We’ve got a week now to recover for our Boxing Day game.

“Gloucester are quite expansive in the way they play and, if you do play and let your centre-halves widen the width of the box, it’s difficult to play against sometimes. After conceding so early it then becomes even more difficult.

“The goal we got five minutes before half-time allows us to change the way we play in the second half because we were in front. I just felt while we were pressing them we were a little bit open. We made a change at half-time and said that we won’t chase anything, we’ll drop back and let them have possession of the ball.