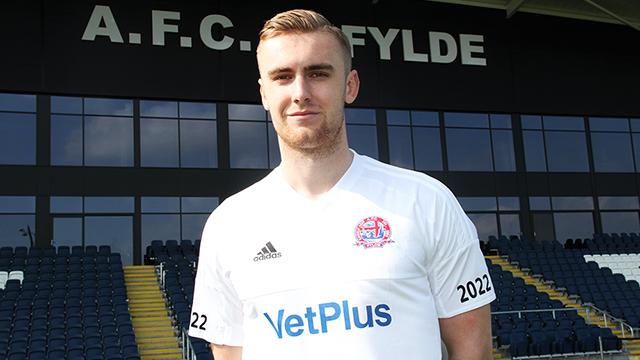 Defensive duo Jack Cowgill and Kieran Kennedy both put pen to paper on deals with the Coasters yesterday and Challinor was pleased with his last minute business.

“Jack is a ball-playing centre half who has been in and around Barnsley’s first team from a very young age and he’s matured quite a lot.

“He’s had some good experience playing at Braintree in the league above us last year too. He picked up and injury and I think for him now it’s about going out and playing football.

“He’s played a lot of U23s football and he had options to go and do that at Championship clubs but he’s looking a little bit further ahead really.

“He wants to go out and play men’s football and build himself a career. He’s been training with us for the past few days and it’s likely that he will be involved with us right away.

“Kieran is a little bit different. He was at Man City as a youngster and then he went to Leicester and played in their U23s for a season. He then went up to Motherwell and played in the Scottish Premiership for them, but he’s just negotiated a release from his contract up there and he was looking for a club.

“With him it’s also a case of having one eye on next season. He’s been training by himself for the last couple of months so it may take him a little while to get up to speed.

“We have the chance to take a proper look at him now and it gives us another number defensively. One who is certainly the right pedigree in terms of the games he’s played and the teams he’s played for.

“We needed to get numbers in defensively and getting players that have had experience at this level or above is difficult.

“It’s also important to get the right players at this level. We’ve had Dan (Jones) and Laurence (Maguire) who did really well for us but they’ve now returned to their parent clubs.”

The double swoop comes at a good time for the Coasters with all three central defenders struggling with injury ahead of this tomorrow’s trip to Nuneaton Town.

“Steve Williams is doing a little bit of running and we have reserve game on Monday so it’s likely that he’ll be involved in that. Dom (Collins) has been managing an ankle problem since the Harrogate match a few weeks ago and it is a case of getting him through to the end of the season and getting as much as we can out of him.

“We’re hopefully in a position as well where we can have Josh Langley back fit in the next week. It’s about having every avenue covered.”