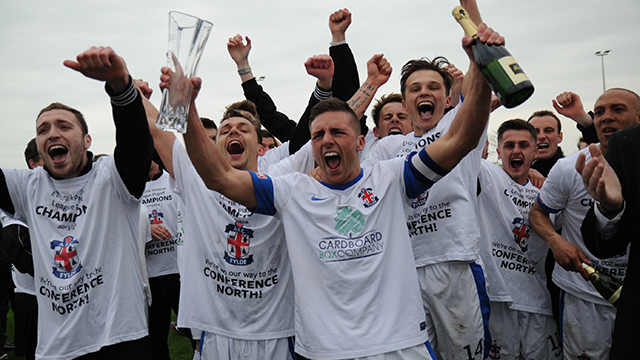 Finals, penalties, glory, heartbreak – AFC Fylde boss Dave Challinor has been through it all when it comes to Play-Off drama.

Tomorrow’s clash at Boreham Wood will kick-off Challinor’s fifth Play-Off campaign in just over six years with the club.

The Coasters manager guided Fylde to promotion through the play-offs back in 2014, however suffered disappointment at the most recent attempt, losing in the final against North Ferriby United, before lifting the National League North title the following year.

Whilst admitting the play-off lottery isn’t a particularly enjoyable experience as a manager, Challinor believes there is no better way to get promoted.

Challinor said: “Ever since moving into non-league football, I have been through every different play-off scenario.

“It has been similar here. We have had highs and lows and it all comes down to who performs on the day. Form is out of the window.

“It is a very, very unique environment and this year’s format changes it all again.

“They are now one-off games and we already know who we will face in the next round.

“The majority of the time, the team that performs best will go through, but there can be anomalies or sometimes that bit of luck that can decide the fate of a club’s whole season.

“Anything can happen on the night. I’m sure there will be plenty of emotion and 22 lads out there doing everything they can to win.

“It will be tense and not particularly enjoyable from my point of view, however there is no better feeling than achieving promotion through the play-offs.

“I hope the best team over the next week or so goes on and gains that promotion.”

The Coasters are also faced with the prospect of extra-time and penalties tomorrow evening if the scores are level and Challinor hopes it doesn’t come down to the dreaded shoot-out.

Challinor added: “We haven’t really practiced penalties yet but we will probably do that today.

“I saw Gary Neville talking on Sky about England practising penalties and trying to recreate pressure situations with crowds, but there’s only so much you can do.

“We have to be realistic and accept that situation could arise and decide the game, so we will take it into account.

“You can’t prepare too much for them because you are relying on players making that 50 yard walk toward a crowd, where the majority of them want you to miss, and holding their nerve.

“When it comes to the kick takers, I will always pick them to take the pressure off the players.

“Fingers crossed it doesn’t come to that, but if it does then we will be ready.”