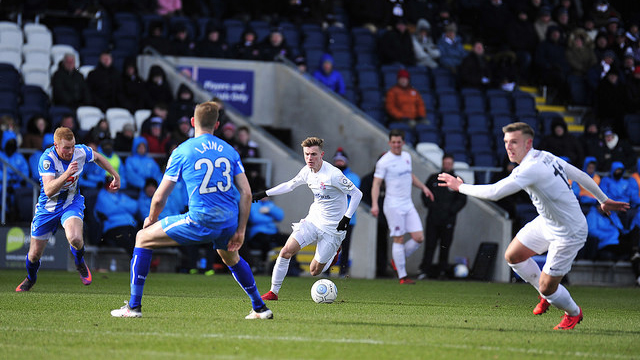 AFC Fylde boss Dave Challinor believes his side brought pressure on themselves after throwing away a two-goal lead against Hartlepool United.

The Coasters led 3-1 going into the final minute at Mill Farm, however two wonder goals from their struggling opponents ensured it was two points dropped for Challinor’s promotion-chasers.

Challinor said: “The manner in which we draw the game is obviously very disappointing.

“It was reminiscent of our results earlier in the season where we got into winning positions and didn’t get over the line.

“If we had scored two goals like theirs in the last minute then I would have been thinking we too probably deserved a point.

“They were two great strikes from distance, granted they were wind-assisted and the elements have played a big part in the game.

“Football is never over and you have to see it through. When their lad smashes one in from 30 yards it gives them a lift and makes for an uncomfortable last five or six minutes.

“It was preventable because we are caught flat footed and should have been picking up the second ball after losing the first.

“The second one is down to experienced players making poor decisions and putting us under unnecessary pressure.

“You can’t do much about the strike itself but there were so many mistakes and chances to clear in the lead up to it.

“When you play in conditions like that you have to be bang on. We were sloppy in the first half and handed them several one vs one situations. You have to be so careful with the ball and switched on when the weather is like that.

“It has cost us two points and ultimately that could cost us a place in the play-offs. We have to learn from it very quickly to make sure that isn’t the case.

“We will be disappointed but from Monday we will be putting a plan in place to go and win at Dagenham on Saturday.”