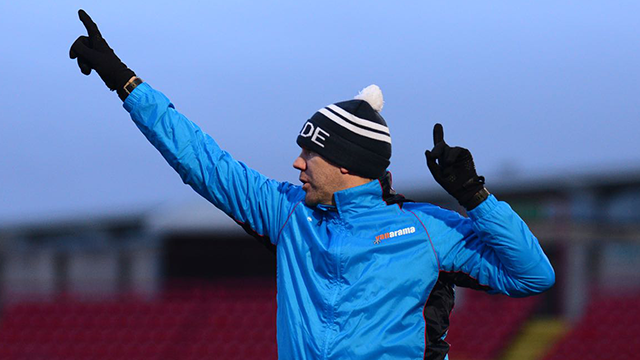 Challinor keen to avoid any doubt

The maths are simple … three points at Wrexham will see AFC Fylde secure a play-off place in their debut National League season.

Fylde occupy fifth place in the league standings ahead of the final game of the season and manager Dave Challinor is well aware that victory at the Racecourse Ground would guarantee their top seven spot.

A fine run of four consecutive victories saw the Coasters take the promotion places by storm, however a slight stutter over the last two outings has left several clubs breathing heavily down their necks.

Depending on results elsewhere, the Coasters may still qualify with less than a win in Wales but that isn’t a risk Challinor is willing to take.

Challinor, who has already masterminded three promotions during his six-year tenure, said: “We may need to win on Saturday, we might get away with a draw or we could even potentially lose and still get in the play-offs!

“Either way, at the start of the season – or even just eight weeks ago – I would have taken a one-off game to get in the play-offs.

“It’s like a dress rehearsal for us because it’s almost a play-off game of it’s own. If we don’t win then there’s a chance our season could be over. It’s as simple as that.

“These type of games are the reason that we are involved in football and the big players have to step up. We need ours to do that if we are to have any chance of winning.

“We have to put a plan in place and make sure that there are no grey areas when we arrive on Saturday. What we have to do needs to be black and white for the players.

“We are up against a very good team, but they are a team that we have already beaten twice this season so we know we can do it.

“Hopefully we get the result and set up a really high profile game next week.”