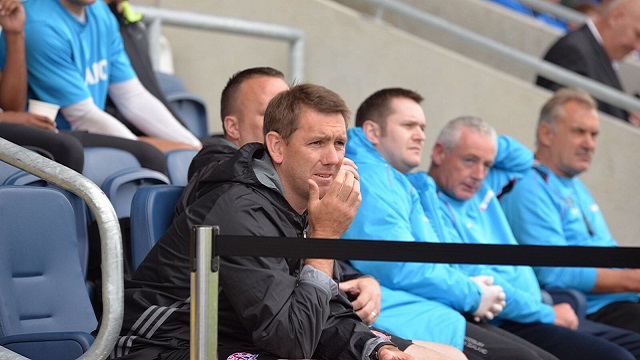 AFC Fylde manager Dave Challinor is predicting another close contest when his side take on FC Halifax Town this afternoon.

Both sides are unbeaten in their last three outings and whilst the Coasters hold the bragging rights with a league double over the Shaymen last season, Challinor is expecting a tough test in Yorkshire.

Challinor said: “We know all about them and they know all about us. They are a direct team and they get the ball forward, as any team would with a 6’ 7’’ target man. We know what to expect, but dealing with it is the challenge.

“We have to cope with that and then stamp our style of play on the game, hopefully a little better than we did on Monday against Barrow because the game didn’t really settle down.

“In hindsight, after a big effort on Saturday at Hartlepool, Monday was just about getting the result and we did that.

“The two games against Halifax last year could have gone either way and they were tight contests. Our result at their place all but secured the title last year and knocked the stuffing out of the chasing pack. It was a massive win and hopefully we can repeat that.”

Left-back Zaine Francis-Angol will miss the trip to The Shay after suffering a hamstring injury on Monday evening, however Challinor brought in highly-rated full-back Luke Burke from Wigan Athletic on Thursday and the 19-year-old could make his debut.