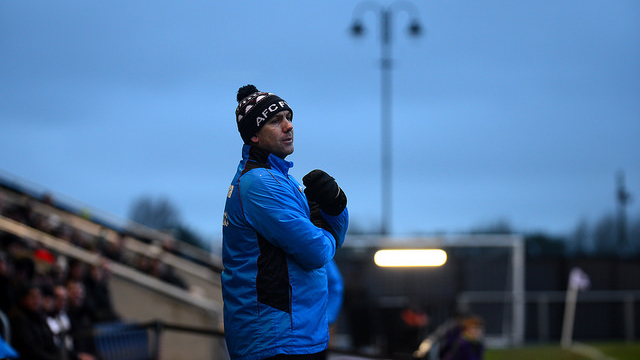 The Coasters raced into a four-goal lead within an hour at Mill Farm on the way to their biggest win of the season – a result that sees Challinor’s side climb into their highest position in the National League table since August.

Challinor spent eight years at Prenton Park during his playing days and was delighted to avenge the Boxing Day defeat against his former club.

Challinor said: “It was extra special for me because they are my old team and I have fond memories there. And whilst I always want them to do well and I hope they go up, I wanted to win.

“The scoreline on Boxing Day at their place didn’t reflect our performance. We took a lot of plaudits from that game and people recognised that it wasn’t a 4-1 game.

“So to bounce back as we did and produce a determined, gritty performance with a dash of quality added in was great.

“It’s difficult to play Saturday / Monday but to back up the win at Maidenhead with another three points was fantastic.

“We thought the system we played at Maidenhead gave us some joy so we stuck with it. Tranmere are a very good team and we nullified their threat.

“I could be ultra critical and pick out things that we could do better, but I won’t start picking holes in that performance. To win convincingly against one of, if not the best team in the league is very pleasing.

“I have to admit that when the game went to 4-1 some slight dount crept into mind because momentum can change very quickly, especially as their fans were really getting behind them.

“In the main we showed fantastic character in difficult conditions against a team that had beaten us just a few days previously.

“It has given us a lot of belief ahead of what is a very busy January.”

Following their five-star goal rout, Fylde are now the third top scorers in the National League and Challinor is delighted that the goals are spreading around his team.

Challinor added: “Playing the system that we have gives the wing-backs license to get forward. It was great that Zaine was in the position to score, but I’m not overly fussed who actually scores the goals.

“People have been slightly critical that Rowey scores a lot of our goals but that is nothing new because he’s scored over 120 in three seasons so he is almost expected to score.

“So for a few others to chip in with goals is very positive.”