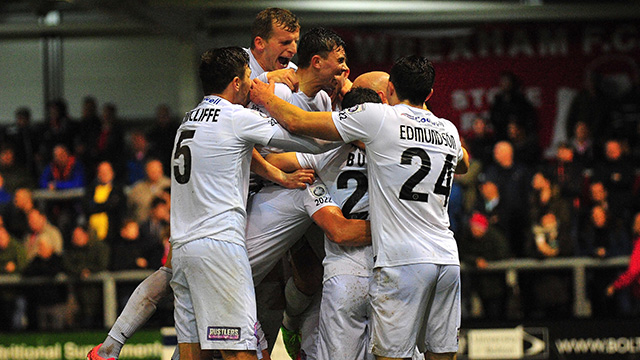 AFC Fylde manager Dave Challinor hailed his side’s victory over Wrexham as ‘the most complete performance of the season’.

Goals from Jonny Smith and Jack Muldoon secured back-to-back victories over the high-flying Welsh outfit and Challinor was full of praise for his troops.

Challinor said: “That was our most complete performance of the season by a long shot. We could have won even more comfortably in the end because we had numerous opportunities. We looked solid in what could have been difficult conditions.

“To beat a team that hasn’t lost for 11 league games, and in the manner which beat them, should fill us with confidence.

“We looked a really good side at either end of the pitch. There could have been a tendency to protect what we had at 1-0 but the lads continued to be positive and deservedly got that second goal.

“We then felt pretty comfortable seeing out the game. We had to deal with some long balls into the box toward the end, but it was our night and we deserved the win.

“We have another important game at Solihull this weekend and they have also claimed a vital three points so both sides will be hoping to come out on top.

“We have put in a fantastic display against one of the top sides, so we know we are able of competing with anyone at this level. We now have to show that more consistently.”