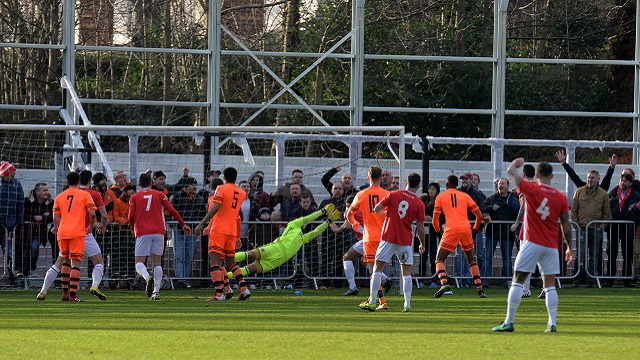 AFC Fylde manager Dave Challinor could not hide his frustration after the disappointing 5-0 defeat at Salford City.

The Coasters still hold their nine point lead at the top of the National League North despite the defeat but Challinor was damning in his verdict of the game.

“Sometimes after a game you wonder as to whether you should say what you really feel, but I’m someone who is honest and I wear my heart on my sleeve. That was the most abject performance I’ve ever been associated with as a manager.

“You can hide around players that are missing, but every single player out there will tell me that they should be in that team. That performance tells me – something that I already knew about some of them – that they shouldn’t be in the team. We need to get bodies in quickly.

“This would have been a tough enough game as it was with a full-strength team. We knew that they would be a threat from set-pieces but we’ve got a big enough team to deal with that, plain and simple.

“It just comes down to a lack of desire. We started the game well and for the first twelve minutes or so, we were on the front foot. As soon as the ball goes near our goal, we look like we’re going to concede.

“The goals are absolutely horrific. We gave them warning after warning of what they would do. Salford work hard, they’re in a good position in the league and they will be up there challenging come the end of the season. But they didn’t do anything that we didn’t warn our players about.”