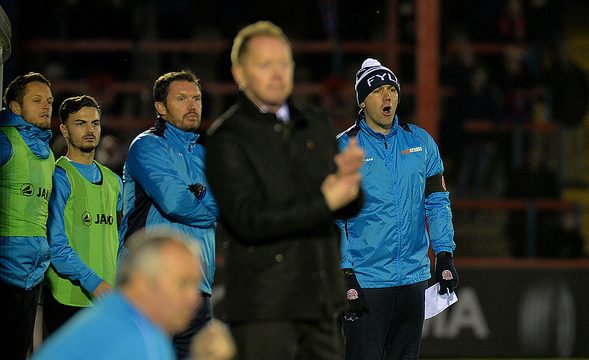 The Coasters had won their previous four outings in all competitions however a late goal saw Challinor’s troops leave South London empty handed.

Challinor said: “I’m disappointed because the little run we had put together has come to an end. We got ourselves into a position where we had something to hold onto and then made it very difficult for ourselves. We were the masters of our own downfall.

“We weren’t at it at all in the first half and we were probably lucky to still be in the game. We give our players license to go out there and express themselves and we didn’t do that in the first half. We spent too much time just trying to stop them instead of playing our own game.
“We got a reaction after the break and we improved. Our decision making was poor all over the pitch and that was highlighted with the red card. I’m not sure what Jack has done but everyone has suffered for it.
“Aldershot then went down to ten and the game was stretched. Someone isn’t doing their job in the box for the winner and it has cost us the game. It would have been a good point at a difficult place to come and we let it slip away.
“We didn’t play and didn’t get on the ball – we hid away in the first half particularly. Hopefully this is an eye opener for the lads.”