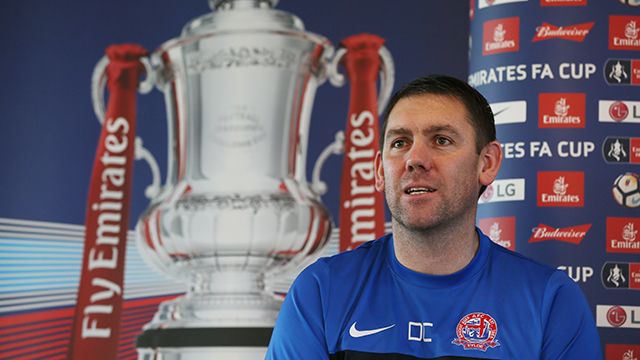 AFC Fylde boss Dave Challinor insists his side aren’t getting ahead of themselves as they gear up for tomorrow evening’s FA Cup second round replay against Wigan Athletic.

The Coasters earned a credible 1-1 draw against the Latics just over a week ago and now travel to the DW Stadium for a cup showdown as the two teams battle it out for place in the third round.

The winners of the tie will face Premier League side AFC Bournemouth at the next stage of the competition but Challinor is refusing to take his eye off the job in hand.

Challinor: “We have a big task in front of us but one which we are looking forward to and we go there with with nothing to lose.

“We will have to be right at it to get anything and get that bit of luck, but fingers crossed we can cause an upset.

“The first game confirmed what we already knew, they are a very good side that are difficult to play against. We had watch videos and studied them but the original tie gave us a ‘real life’ insight into their play and that will benefit us tonight.

“We have to try and stay in the game – like we did at Mill Farm – but ultimately we have to put pressure on them. 90 minutes is a long time, especially against a side that keep the ball as well as they do. There will be occasions where we will have to be disciplined and accept that they are going to have the ball.

“Yes the draw has pitted us against a Premier League club, but we aren’t looking any further ahead just yet because we still have this mammoth test ahead.

“We are solely focused on this game and we are going to give it our very best shot. It is a big chance for our lads to show what they can do on the big stage. It’s a big occasion at a great stadium and it’s another opportunity to come up against very good players.

“These occasions are the reason why you play football. You can take them for granted at times, but they can be few and far between at this level so you have to cherish them.

“We have taken some belief from the first game and proved that we can compete against clubs much higher up the pyramid than ourselves.

“Wigan put out a full strength side last time around and I fully expect the same from them tonight.”