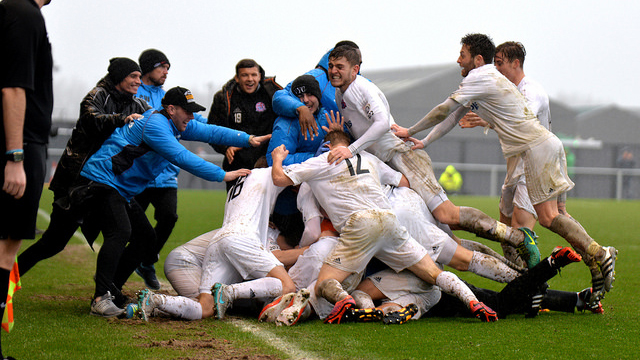 Dan Bradley netted late on before Blinkhorn nodded home in the 97th minute to salvage a point and Challinor was over the moon.

Challinor said: “Getting the equaliser so late made the result feel like a win for us.

“We were overrun in the first half because Kidderminster are very good at what they do but I think we merited something from the game from our performance after the break.

“The game was probably a bit of a learning curve for us. Half-time came at a good time for us and gave us the chance to reiterate to the players what we wanted them to do.

“The way that the pitch was becoming and how wet it was getting, we knew that there were going to be mistakes. We chased a lost cause and got our just desserts by pulling a goal back and that gave us a massive boost.

“And then when Blinks scored deep into stoppage time there were amazing scenes. I suppose that when the game is coming to the end you just hope that you get that one last chance.

“It was a great header but from my angle it looked like the keeper was going to get there. For it to nestle in the corner was amazing and the reaction showed how much it meant to everyone. Even I almost ended up on my backside in the celebrations!

“They are the moments that you play football for. Hopefully it’s a goal that will prove even bigger for us further down the line.”