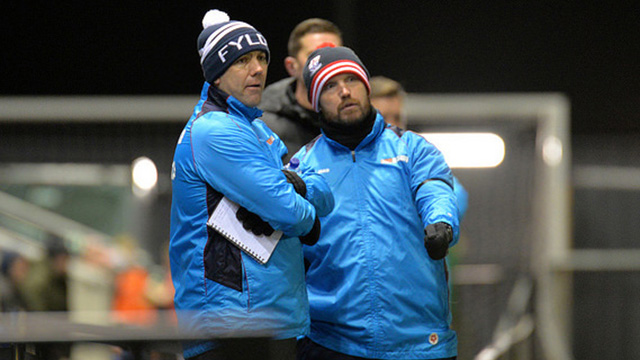 AFC Fylde manager Dave Challinor admits he has revised his ambitions for the season after smashing through the 50-point barrier at the weekend.

Saturday’s 2-1 victory at Gateshead saw Challinor’s side sneak back into the play-off places as they head into the final stages of a sensational debut season in the National League.

The Coasters sit just seven points behind league leaders Macclesfield however Challinor refuses to set his sights too high just yet.

Challinor said: “At the start of the campaign, our realistic aim for this stage was to be safe and secure for next year.

“We have achieved that and we now have an opportunity to change those ambitions and look up. We have given ourselves a realistic chance of finishing in the play-offs.

“We know it is a big ask and there still is a big challenge ahead but the league title is wide open. There is the opportunity for a club to put a run together and earn that title. Any one of a number of clubs could do it and we have proved that we are one of the clubs capable of doing that.

“Realistically, we aren’t aiming for that but we do want to win as many games as possible to ensure we keep hold of our place in the play-offs.

“The points total required to win the league will be nowhere near as high as it was last season. Mid-80s will probably be enough. For us to get that we would have to win 11 games out of 13 and that’s a massive ask.

“In terms of the play-offs, it is difficult to predict how many points teams will need. I don’t want to guess at a number, underestimate and ultimately miss out.

“We have to be proactive and get as many points as possible. This weekend top play second, third play fifth and fourth play eight so if we can take care of our own business then come 5pm on Saturday the table could have a very different complexion.

“We still have some tough games coming up and a lot of the top clubs are up against each other but at the end of the day we all play each other twice so it doesn’t make much difference.

“We still play Aldershot here, Dover here, Sutton here and Wrexham at their place, but the tough games start this weekend against Leyton Orient. Although they haven’t had the start they would have liked, they have had a decent run of late.

“It is also the chance of a first league double but I probably didn’t expect that to be against Leyton Orient!

“To win there earlier in the season was a great result for us – up there with my best results with the club. To go to a team that had just been relegated from the Football League and win was huge. The three points came at an important time too.”