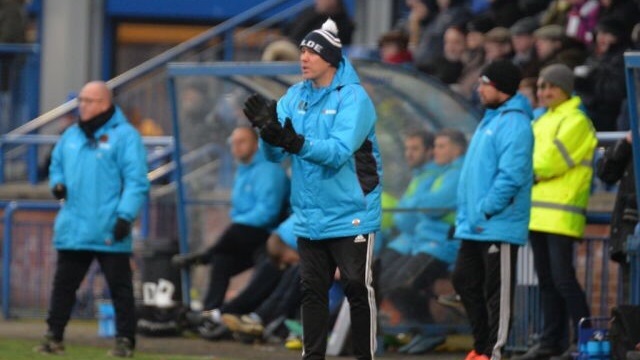 AFC Fylde manager Dave Challinor believes his side got what they deserved in the 3-2 defeat at Curzon Ashton.

The Coasters’ lead at the top of the National League North was cut to six points following their third defeat of the season.

“If you concede goals in the manner that we did, then you don’t deserve to win any game. That was the case.

“I wouldn’t say that their two goals before the break killed us because we got back into the game but conceding goals like that, even at kids level, is embarrassing. We spoke an awful lot in training about one goal not becoming two and that’s exactly what happened.

“It was a poor game if I’m honest. Did we deserve to be in front? I don’t think we did. There was nothing in the game so to go in 2-1 behind, the game could’ve been over. We got back in it through a whopper from Rowey and to be honest, after that, I’d have taken a draw because we weren’t great.

“You could tell that a couple of the lads hadn’t trained as they were out with niggles. Rowey and James (Hardy), who hadn’t played for a month, looked a bit rusty and going forward we weren’t as potent and effective as we could be.

“You can’t concede in the manner that we have there. They were horrific goals.”