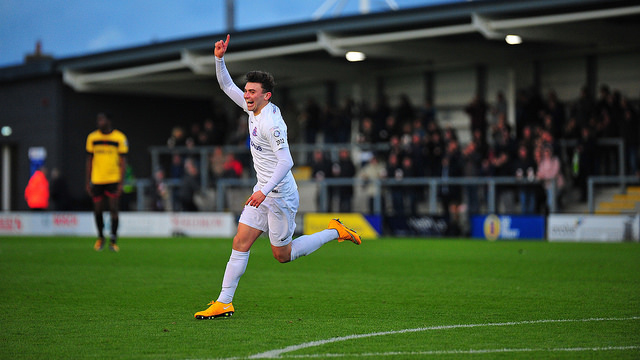 AFC Fylde boss Dave Challinor believes his history-makers can ‘dare to dream’ after reaching the FA Cup second round for the first time.

The Coasters are in the hat tomorrow evening after seeing off Kidderminster Harriers 4-2 at Mill Farm and Challinor was quick to praise his deserving players.

Challinor said: “It feels great to be in the second round.

“The players deserve a massive amount of credit and hopefully they get what they deserve in the draw – whether that be a big tie or a favourable one that gives us a chance of progressing.

“We are at the point where we can dare to dream because that third round draw when the big boys come in is just one step away.

“The first half was close so at the break I wanted us to get more out of our wide players and for the middle three to take control of the game. Well they couldn’t have done that any better if they tried.

“For 20 minutes after half-time we were fantastic. We took our chances well and they were really good goals. The last 15 minutes were disappointing because we made life difficult for ourselves but it was always going to be a tough game because they play good football.

“We have backed up our fine form in the league with another win and now we can look forward to the draw.

“It doesn’t matter to me who we get. I guess you want the lowest ranked team at home until you get to the third round. If we can get a tie that, on paper, looks winnable then that would be great.”