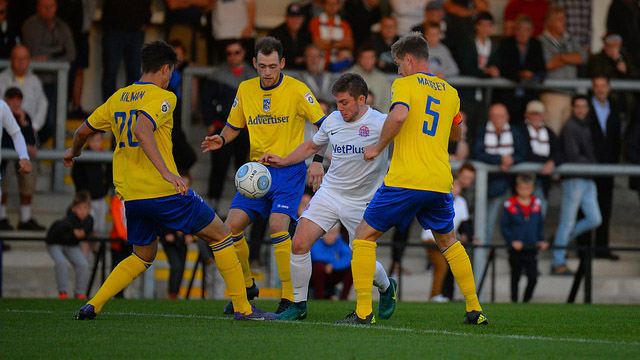 AFC Fylde manager Dave Challinor lamented his sides lack of cutting edge as they suffered their first defeat of the new National League season.
The Coasters, who saw captain Josh Langley dismissed early on, spurned several gilt-edged opportunities as they went down 4-1 at home to Maidenhead United.
Challinor said: “I wasn’t disappointed with the performance as a whole particularly. We started brightly and perhaps, because we were on top, we started to take it easy.
“Ultimately it’s about putting the ball in the back of the net and although we were on top, we couldn’t do that.
“A bad decision is then made at the other end of the pitch and we end up with ten men for most of the game. We then hit the self-destruct button a few minutes later and concede another penalty and to go two behind, gives us a mountain to climb. We got a goal back at a good time and we thought if we could try and stop them scoring again then we had a real chance of getting something.
“We had five really good chances that didn’t go in and we didn’t keep them out at the other end.”
“Sam’s disallowed goal shortly after the break was a pivotal moment because we go from being potentially level to 3-1 down in a matter of minutes. It just didn’t seem to go our way.”