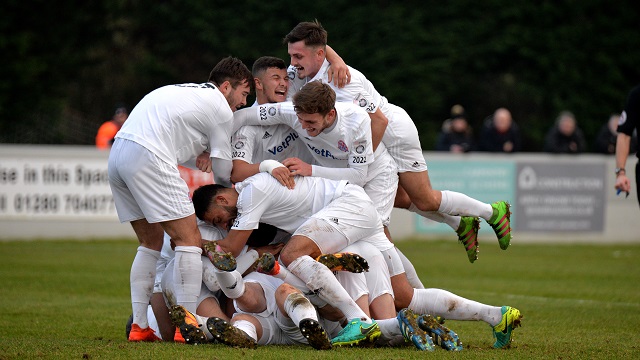 Challinor – “All about results”

AFC Fylde boss Dave Challinor admitted ‘it’s all about results’ as his side moved a huge ten points clear at the top of the National League North table.

An impressive 3-1 victory away at Brackley Town put further space between the Coasters and the chasing pack and Challinor was impressed by his side’s spirit.

“It’s all about result at this stage of the season. Brackley is a really tough place to come and regardless of the run they’re on, Brackley are a good side. The game was by no means a classic but we’ve dug in.

“We’ve defended well and got our little bit of luck. We were probably a bit unlucky with their goal, it’s just a deflection that has looped up. Laurence (Maguire) has done everything he can to clear it as well but it’s found the back of the net.

“I think all the goals were a bit lucky to be honest. They weren’t great goals, but we’ve put the ball into good areas and we’ve got our just deserts for doing that. Sometimes you have to go back to basics.

“We had Dan Jones playing down the left and he has a massive throw so we can put the ball into good areas. The ball broke and we’ve ultimately got the opener  from a cross. The second goal was a bit of a scramble. It’s hit the post and come back and Willo has put it in.

“For the third goal, again we’ve got the ball into a good area and I don’t care how it ends up in their net as long as it does.

“The team showed fantastic spirit and we’ll take the three points all day.”