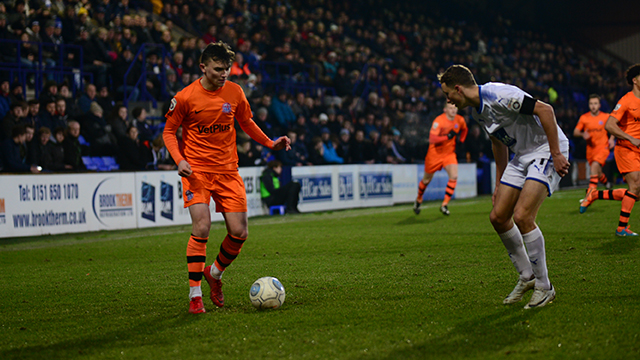 AFC Fylde boss Dave Challinor is hoping to extend the loan deals of three key youngsters over the coming days.

Both Jonny Smith, who scored Fylde’s solitary goal in the 4-1 Boxing Day defeat at Tranmere Rovers, and Luke Burke – on loan from Bristol City and Wigan Athletic respectively – see their deals expire next month, whilst defender George Edmundson is due to return to Oldham Athletic on January 1st.

However, Challinor keen to keep hold of his trio of stars and is in discussions with their parent clubs as the Coasters head into the second half of their debut National League campaign.

Challinor said: “Jonny and Luke’s deals are due to expire at the end of January so they still have a month remaining. We are speaking with both their clubs at the moment and hopefully we can get something sorted because they have been very important for us.

“Jonny has great ability and he has been a real threat. He created some good opportunities against Tranmere and got his goal so we would love him to stay.

“George’s situation is different because his loan is up on the 1st after the Tranmere game. That’s another we are keen to extend but if things don’t materialise over the next few days then we do have other options.

“We are pursuing one or two other deals at the moment but it’s not easy because there are a lot of clubs after the same players.”

Challinor’s side travel to Maidenhead United on Saturday looking to get their season back on track after five without a win and the manager is desperate to exorcise some demons from the 4-1 home defeat against the south London outfit.

“We had a disappointing defeat in the reverse game at Mill Farm earlier in the season. Fortunately Dave Tarpey (who scored all four in the defeat against Maidenhead) isn’t there anymore so he won’t be back to haunt us!

“We were down to ten men inside 20 minutes in that game so it was always going to be an uphill challenge.

“We probably had more chances in that game than a lot of others this season but we were emphatically punished for little mistakes and for going down to ten.

“I don’t expect the pitch to be great but we have to go down there and grind out a result.”