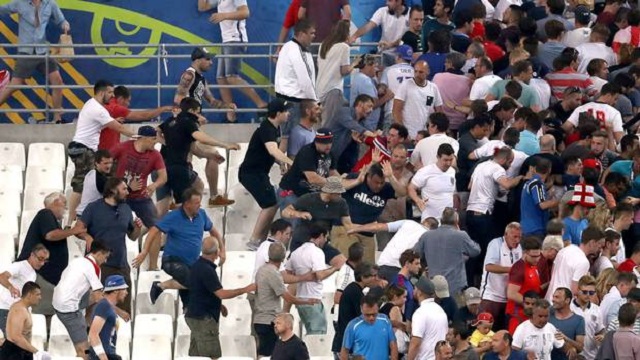 AFC Fylde Chairman David Haythornthwaite has revealed the terror of the horrifying attacks on England fans in Marseille over the weekend.

Haythornthwaite travelled to France to support his country against Russia in our opening match of Euro 2016, but instead got caught in the centre of an ‘onslaught’ from football hooligans.

The Coasters chairman said: “I have followed England all my life right from going to the European Championships back in 1980 in Italy and I can honestly say I have never seen anything like what happened in Marseille at the weekend.

“The fact that the England fans have taken the rap in the press is disgraceful. I was there with five of my friends, who included businessmen, dentists and magistrates and we certainly aren’t football hooligans.

“Up until about 2pm on Saturday there were around 25,000 England fans gathered together enjoying a drink and there was absolutely no problem whatsoever.

“Shorty after that around 100 Olympique Marseille fans turned up unannounced and set upon the England fans. Our fans had no choice but to react and defend themselves.

“Around an hour later, the six of us were having a nice peaceful meal in the square when all of a sudden the attack by the Russians began. As anyone who was there can testify these were men who had come prepared and had been, by all accounts, training for this day since the fixtures were announced.

“They turned up ready for battle and these weren’t 18-year-old kids, these were 30-odd year old built men and the onslaught on our fans was frightening and indiscriminate. It didn’t seem to matter if you were a pensioner, woman or child.

“We had to actually drag an England fan who appeared to be dead into our restaurant and barricaded ourselves in. He was unconscious for six or seven minutes but thankfully he came around.

“The battle – that was more like a scene from Gladiator – went on for almost half an hour before the police even turned up. They were nowhere to be seen and when they did eventually arrive they had no idea how to deal with the situation.

“Once the Russian fans realised the police weren’t going to arrest anyone, this just encouraged them further still, because they now had what they came – a fight, and it just got out of control.

“Having witnessed that at 4:30pm, they then allowed the same mob in the same black shirts to attack fans on the way to the ground, including our head of the AFC Fylde Community Foundation Tom Hutton who ended up in hospital, before inexplicably letting them in the stadium.

“It was obvious to everyone that those 300 or so ‘ultras’ were going to attack the England fans at some point because the only thing between them was a few stewards. Unbelievably there wasn’t one policeman in the whole ground and the fans in that end, that were mainly families, were attacked again at the final whistle. How no one was killed I’ll never know.

“For some strange reason there is very little official footage of what happened which is a shame because people would see that the trouble was purely orchestrated by the Russian fans.

“I think the media and The FA owe the England fans, of which I am one, a massive apology for the condemnation that we have received when in reality we were subject to the most terrifying attacks I have witnessed in 36 years of following England.

“We are off again on Wednesday for the Wales game but unfortunately one of our group has decided against joining us because his family are so worried for his safety. My wife and kids are the same but the rest of us are still going as we always have done and we always will.”

Aside from the violence, Haythornthwaite praised England’s performance on the pitch and is full of confidence ahead of the showdown with Wales this afternoon.

“I thought England played very well. I came away from the match disappointed with the result but I thought the performance was decent. The two full-backs were excellent and I thought Rooney played very well in his midfield role. I’ve always been a Rooney fan and that is definitely his position now.

“Overall we played some good stuff and on another day it could have been 3-0 but we are still in it and I think we will go out there and beat Wales. I think Wales have had their big moment now winning their first game and on paper we are a far better side.

“Ultimately I think our quality will overcome their spirit and our class will show through.”