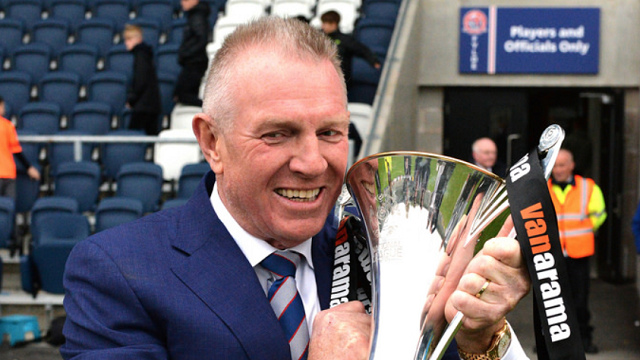 AFC Fylde chairman David Haythornthwaite believes his side are well on course to reach their target of Football League football within five years.

The Coasters have ‘2022’ stitched into their shirt sleeves – the year the club have targeted to reach the Football League – and Haythornthwaite insists the plan is in full swing.

Fylde are now just one step from the promised land following promotion to the National League as champions and the chairman is relishing next season alongside the ‘big boys’.

Haythornthwaite said: “We set out a plan, as everyone knows, to get to the Football League by 2022. We gave ourselves three years to get out of this league and we’ve managed to do it in the third year.

“Now we have five years to get out of the next one. It will be a very difficult league to get out of, as this one has proved.

“The step up present us with a completely new challenge next season. For a start the travelling is going to drastically increase – we will have 14 overnight stays, so the cost of running the club is inevitably going to go up.

“But that’s why we have done all of this – to be up there with the big boys and we are very much looking forward to it.

“We aren’t used to losing here so we don’t want to go up and start losing games, we want to compete. Those coach journeys will be a lot longer after a defeat so we are going to have a real go.”

Fylde ended the season six points ahead of their closest rivals Kidderminster and Haythornthwaite admits the two results against the league’s runners up proved pivotal in the title race.

“The two games against Kidderminster have been my two highlights this season. I thought we played brilliantly away at their place (Fylde drew 3-3) and it was a fantastic game of football.

“And the most emotional moment of the season has to be Matt Blinkhorn’s last minute equaliser in the return game at Mill Farm in March.

“The season could have gone very differently if we hadn’t got that goal. We have been a very resilient side this season and we have scored a lot of late goals.

“Manchester United used to have ‘Fergie Time’, well we have ‘Chally Time’ now! And that’s a result of going full-time, we can see games through right until the end and grind out results. We wouldn’t have done that last season.

“We have proved a lot of people wrong here and we have built a fanbase from nothing. We have gone from one man and his dog a few years ago to averaging almost 2,000 this season.

“People said we were a pub team, they said we wouldn’t last, they said we couldn’t put 2022 on the shirt. Well we are starting to prove the doubters wrong.

“But we are still only just starting on this journey and there is still a lot to do and that’s what drives me on.

“The planning and budgeting for next season has already started. The manager already has his transfer targets and we have approved them in principle so we want to get them sorted as soon as possible.”