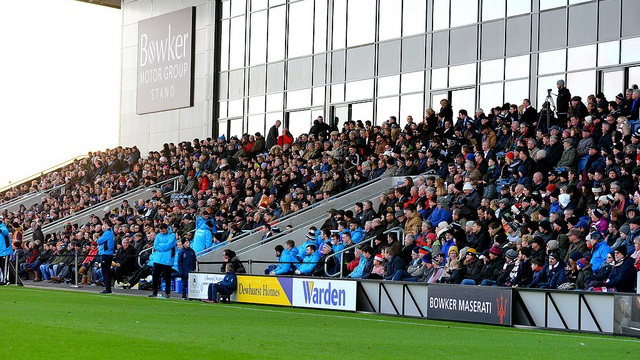 Chairman – “Gamble has paid off”

AFC Fylde are halfway to paradise in terms of winning promotion to the National League.

And Chairman David Haythornthwaite also believes his dream of building a club capable of mixing it with the best in the region is right on track.

After a record-breaking 3,850 crowd attended the year’s final home fixture against Chorley on Boxing Day, David says he is ‘immensely proud’ of the progress made at Mill Farm.

“Everything we have worked towards in the provision of facilities and amenities came together so well on Monday; it was just fantastic to be there to see it.

“We have invested heavily in technology, particularly in relation to customer care, trying to make it as easy as possible for supporters of both clubs to buy tickets in advance. That technology enabled us to get everyone inside the stadium well in time for kick-off without the usual delays often associated with large crowds.

“Mill Farm also offers first class facilities for all attendees, be it standing on the terrace with family or friends for £8 (with under 16s going free) or taking advantage of our five-star corporate offerings.

“It’s significant to note that we managed to completely sell out the Presidents Club for £65 a head and had 65 people in our 2022 club paying £80 each. Everybody told us that this was impossible at National League North level but we proved the doubters completely wrong.

“We didn’t get the result we were looking for on Boxing Day, but that’s football and Chorley certainly deserved to win on the day. However, I believe everyone who attended – many for the first time – will have enjoyed the experience and atmosphere. Excluding the 765 away fans, we maybe had up to 1,000 people attending for the first time and I like to think they all went home impressed.

“It is also becoming increasingly apparent that we are attracting disaffected supporters from not just Blackpool, but also Preston, Blackburn, Bolton and the Manchester clubs who in the main reside on the Fylde Coast but have had to travel to get their football fix.

“Critically, we are building this support without having to give away hundreds of free tickets like other clubs in the area tend to do. Our base is built on solid foundations by people who are prepared to pay if they see the value. As an example, excluding the usual player complementary tickets, we only issued further 18 for the Chorley fixture.

“It is amazing to see that we are now the third highest supported club in our league with an average attendance of 1,804, which is second only to Stockport Country and FC United.

“Talking of FC United, who are our next opponents at Mill Farm on Saturday January 7th, ticket sales are already at 1,300 and hospitality is completely sold out.

“It is immensely satisfying to see this all happening. I have always believed that people want to be part of and to share a successful venture and we have made significant investment and taken a big gamble on that belief. So to see it happening makes it all worthwhile.”