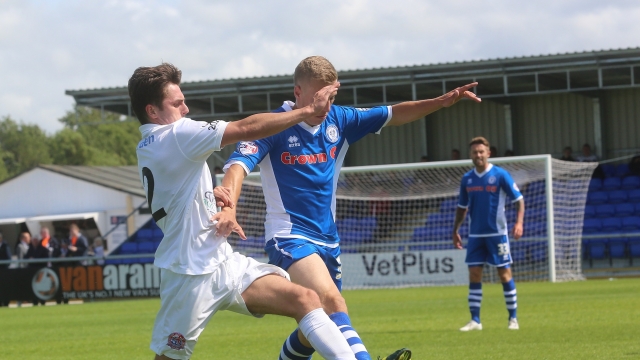 Caspar Hughes spoke to AFC Fylde media team’s Ben Yaffe after back to back 1-0 home wins over League One opposition Fleetwood Town and Rochdale to kick off pre-season with a 100% record.

How did you think the first games of pre-season have gone?

Yeah it was good. It was tough, we’ve all got to get used it really, keep the legs ticking over. We tried to get it down and play on the floor and I think we matched up well to them but it’s still early stages. I was impressed with Dom Collins today actually, we played tough opposition and I thought he handled their attack and midfield really well. The new lads have come in and settled well and it’s all positive.

What was it like playing against a Football League side and actually managing to beat them?

It’s good to play against high quality opposition and to be able to test yourself against professional players. It’s a good taste of that standard. Hopefully we can take this into the league season and prove that we’re a good side and that we’ll do well.

How have you found it coming back into the start of pre-season with all the tough training you have to put yourself through?

I kept myself as fit as I could over the break but it’s always tough coming back at the start, nobody likes doing loads of running but you’ve got to do it really haven’t you. It’s one of them though, you miss it all over the summer and you can’t wait to get back into it when it comes around. If you want to do well during the season then you’ll work hard before the season starts and that’s what I’m aiming to do. 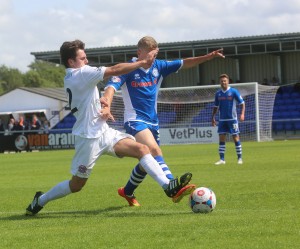 Is it going to be more of the same from you this season compared to last season and how do you think the team will do?

In pre-season you always try different things to see what works but come the start of the season I’d expect us to play similar to how we did last season because we were successful in that way. We did well last year, so why change? I enjoyed playing at right back last season but I can also play in midfield because I like to get the ball forward and pass to feet. I’m happy to play anywhere, I want as much game time as possible. Being able to play both centre midfield and right back gives me more flexibility and the manager can play me wherever he wants to. We want to get promoted this season, no doubt about that. Personally, I want to have a consistent spot in the team and play as well as I can. This is a good club to be at and I enjoy it here, it’s been good so far and the progression the club can make will only make it better to be around the club.

Which side are you looking forward to facing most during pre-season?

Probably Nantwich because it’s only ten minutes down the road from me! I get to a few of lads down there that I know that I’ve not seen for a while so that’ll be good.

The next pre-season game at home is on Wednesday July 29th against Bolton Wanderers at Kellamergh Park. Kick-off is 7.30pm, with tickets priced at £8 adults, £5 concessions and free to all U16’s.